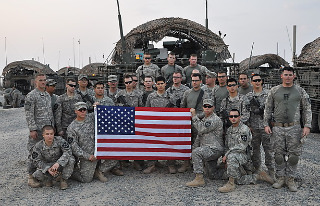 Operational discipline limited the display of the American flag while serving in Iraq — but these soldiers from the 4th Stryker Brigade have just crossed the border into Kuwait. Photo: Washington Post

Just over a month into the new Administration, I wrote:

President Obama today announced an Iraq withdrawal plan that George Bush would be proud to call his own. Actually, it IS Bushâ€™s own.

Donâ€™t be fooled by the lawyerly language in his pledge to complete â€œthe responsible removal of our combat brigades from Iraqâ€ by August 2010. Heâ€™s leaving up to 50,000 troops in place until the end of 2011, and I guarantee that theyâ€™ll have weapons and the capability of responding with more than battalion strength. Iâ€™m not sure how heâ€™s defining â€œcombat brigades,â€ but he must be dancing close to an outright lie â€” a brigade is only 3,000 to 5,000 soldiers, it looks to me like heâ€™s leaving three divisions in place.

… the United States will have six brigades in Iraq, by far its smallest footprint since the 2003 invasion. Those that remain are conventional combat brigades reconfigured slightly and rebranded “advise and assist brigades.” The primary mission of those units and the roughly 4,500 U.S. special operations forces that will stay behind will be to train Iraqi troops. Under a bilateral agreement, all U.S. troops must be out of Iraq by Dec. 31, 2011.

Even though the war isn’t over, this is a milestone worth celebrating.Â  As a testament to the effectiveness of Bush’s “surge” — which succeeded quickly enough to prevent Obama from surrendering — the 4th Stryker Brigade did not suffer a single combat casualty during the one-year tour that just ended.Â  On the brigade’s previous tour in 2007-2008, 37 brave soldiers paid the ultimate price.

In their honor, and in honor of all the troops who remain in harm’s way in Iraq and Afghanistan, this is from the Book of Common Prayer:

Eternal God, in whose perfect kingdom no sword is drawn but the sword of righteousness, no strength known but the strength of love: So mightily spread abroad your Spirit, that all peoples may be gathered under the banner of the Prince of Peace, as children of one Father; to whom be dominion and glory, now and for ever. Amen.