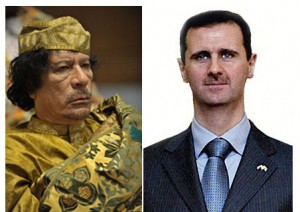 Bashar al-Assad’s regime in Syria has been stepping up the violence in response to waves of protestÂ  across the country.Â Â  As the Washington Post stated in an editorial:

According to Syrian human rights groups, more than 220 people had been killed by Friday. And Friday may have been the worst day yet: According to Western news organizations, which mostly have had to gather information from outside the country, at least 75 people were gunned down in places that included the suburbs of Damascus, the city of Homs and a village near the southern town of Daraa, where the protests began.

The Post editorial is titled “Shameful U.S. Inaction on Syria’s Massacres,” which made me think the Post was advocating armed intervention in that country — which would be War Number Four.Â  But no, the Post has a more nuanced response in mind: it thinks the Obama Administration should recall its ambassador to Damascus.Â  That’ll fix ’em!

For what it’s worth, I agree that we should recall our ambassador.Â  I just don’t think we should pretend that would constitute “taking action.”

The oddest thing about the Post editorial is that its 591 words do not include the word “Libya.”Â  But of course, Obama’s rush to war in Libya creates a context that complicates dealings with otherÂ  Muslim nations.

Even after a month to get used to the idea, I’m still astonished by the intervention in Libya.Â  It makes no sense, coming from a president who won his party’s nomination in part because he was the only contender who had opposed the war in Iraq from the beginning.Â  My basic take is that the intervention may or may not have been a bad idea — but now that we’re at war with Gadhafi, we damn well better beat him.

But how do we justify allowing Assad to kill his own people after taking up arms against Gadhafi for doing the same thing?Â  Syria — with its ties to Iran, its support for Hamas and Hezbollah, and its recent history of shuttling terrorists into Iraq to kill Americans — is if anything a more odious and important enemy than Libya.

I’m conscious of the fact that this line of reasoning can circle around to bite me.Â  Asking “Why Libya but not Syria” begs the question, “why Iraq but not Libya?”Â  One answer is that in Iraq, the Bush Administration — like the Clinton Administration before it, and like every major intelligence agency in the Western world — believed that Saddam still had stockpiles of the chemical weapons he had used against his own people, believed that he was pursuing nuclear capabilities, and believed it was only a matter of time until he began providing terrorists with weapons of mass destruction.

But I think the better answer to “why Iraq but not Libya” is, “not Libya, because of Iraq.”Â  I’ve never wavered in my support for the war in Iraq, but I’m also not blind to the lives, dollars and opportunities that war has cost.Â  A war-weary America, with its military and its finances stretched thin, should think long and hard about starting additional wars of choice.

2 thoughts on “Why Libya But Not Syria? For That Matter, Why Iraq But Not Libya?”