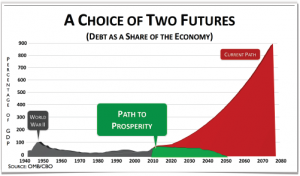 Just how bad is the U.S. debt problem? Jim Manzi spells it out at The Corner:

… we are sitting on the mother of all bubbles. Many, probably most, Americans anticipate a stream of consumption that will be provided for them into old age by the government (i.e., other taxpayers). Unfortunately, most American taxpayers do not anticipate the kind of enormous increase in taxes that would be required to pay for this stream of benefits. One or both of these expectations will not be met. Americans as a whole are simply less wealthy, in the most useful sense of rationally anticipatable future material consumption, than they think they are. And the size of this disconnect is vastly greater than, for example, the size of the housing-price bubble that just popped.

…the combination of the debt we have just put on our balance sheet, plus the deficits that are scheduled to be created by these programs over the next 10 to 20 years, means that we need to confront this problem soon. We have increased public debt from about 40 percent of GDP in 2005 to about 70 percent of GDP by the end of this year; and we are projected to exceed the historical peak debt of about 100 percent of GDP (achieved at the close of World War II) within the next 15 years; thereupon we enter uncharted territory.

The borrowing capacity of the U.S. government is vast, but it is not limitless. At some point that nobody can predict, we will not be able to borrow enough to continue spending n the manner that current law assumes without extremely large negative effects. This is the way the bubble will very likely pop, if we let it come to that: a funding crisis for the U.S. government.Â  This is very unlikely in 2011, or 2012 or 2013; but over 20 years, we are playing with fire. In essence, we donâ€™t need to care that much about the projections for 2080, because long, long before that, weâ€™re going hit the wall, unless we somehow address the problem.

The GOP budget proposal makes clear that “the last Congress” — you know, the one dominated by Democrats — was responsible for the pork-laden stimulus bill.

At a time when the free-market foundations of the American economy were in desperate need of restoration and repair, the last Congress took actions that further undermined them. The President and his partyâ€™s leaders embarked on a stimulus spending spree that added hundreds of billions of dollars to the debt, yet failed to deliver on its promises to create jobs. Acute economic hardship was exploited to enact unprecedented expansions of government power.

This did not sit well with the American people. Citizens stood up and demanded that their leaders reacquaint themselves with Americaâ€™s founding ideals of liberty, limited government, and equality under the rule of law.

“Porkulus” was so extreme that it failed to attract a single Republican vote in the House, and only three in the Senate — the two liberal ladies from Maine and Arlen Specter, who soon switched parties on his way toward losing the Democratic primary in a bid to salvage his job.Â  But the Republican budget document doesn’t let the GOP off the hook:

In recent years, both political parties have squandered the publicâ€™s trust. The American people ended a unified Republican majority in 2006, just as they ended a unified Democratic majority last fall. Americans reject leaders who focus on the pursuit of power at the expense of principle. They reject empty promises from a government that cannot live within its means. They deserve the truth about the nationâ€™s fiscal and economic challenges. They deserve â€“ and demand â€“ honest leaders willing to stand for solutions.

The GOP has a lot of profligate spending to answer for, but at least the party now is putting forth a serious plan, albeit one that will not survive President Obama’s veto power.Â  The question is whether we can get Obama voted out of office before our Chinese creditors cut off the flow of money.