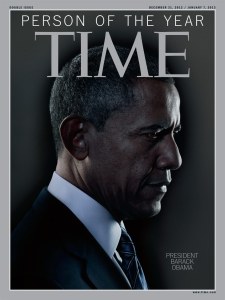 It’s no surprise, of course, that Barack Obama was named Time‘s Person of the Year.Â  In presidential election years, the winner of the election has been named POY in 12 out of 22 times, including 9 of the last 13 and 4 of the last 4. (That’s original research; I counted them up myself.Â  You’re welcome.)

But I was surprised when I read the magazine’s POY essay. I was expecting a glowing hagiography, reminiscent of when the just-elected Obama was sanctified by the Nobel Peace Prize committee.Â  Instead I found a clear-eyed assessment of the re-election effort and why it was successful.

The passage I found most persuasive is set up by a statement from the head of the campaign’s research team that “undecided voters… were making a very trust-based assessment between Obama and Romney.â€

This became the through line of the brutal and at times unfair Obama attacks on Romney â€” the cracks about car elevators, the specious mention of his potentially felonious Securities and Exchange Commission filings, the false claim that he supported an abortion ban without a rape exception, the endless harping on a Swiss bank account once held in his wifeâ€™s name. It all spoke to a central message built around trust: One man, despite his failures, had voters like you in mind. The other man, by contrast, knew how to make a lot of money for people you will never meet.

Of course, Romney turned out to be Obamaâ€™s biggest ally in that narrative.

Indeed he did.Â  Romney’s “47 percent” blatherings probably ended whatever chance he might have had at victory. As the left gleefully pointed out, he ended up with 47 percent of the popular vote.

One final thought: Is anyone else puzzled by Time‘s decision to dramatically darken the Obama “Person of the Year” cover photo?Â  Didn’t they learn their lesson in 1994? 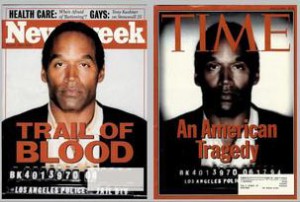