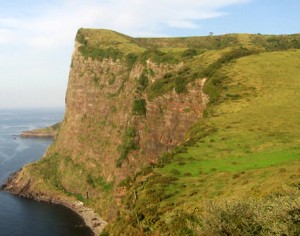 There’s a school of thought among conservatives that letting the country go over the “fiscal cliff” may be the least-bad option.Â  The “sequester” — the automatic across-the-board spending cuts that will accompany the tax increases set for January 1 if no deal is reached — may be the only way to accomplish any spending cuts.Â  Here’s Daniel Henninger in the Wall Street Journal:

Conventional wisdom holds that the sequester is a mindless anti-spending Godzilla. But the sequester, because it is set in legislative stone, possesses what Washington today lacks with the public: credibility.

The only issue on the cliff negotiation table held true by every serious person is that the entitlement crisis is going to crush the country. But nothing is dearer to this president than higher taxes on people defined by him as the wealthiest. If the president’s DNA prevents him from a compromise that also includes a sequester-strength commitment to disarming the entitlement bombs, much less discretionary spending, take the sequester. Better the fiscal cliff than pitching the American people over the bottomless entitlement cliff.

But polls make it clear that the public would blame the Republicans more than the Democrats if we go over the fiscal cliff.Â  And that’s not the only problem the GOP would have.

Play the game out: let’s say there is no deal by January 1, so taxes increase automatically for all working Americans.Â  Democrats quickly will propose legislation to reduce taxes on all but the top two percent of earners. Obama will vow to veto any tax cut for the highest earners, secure in the knowledge that such a veto would be easily upheld.Â  Then the Tea Party caucusÂ  — the segment of the Republican Party which has tax cutting as part of its brand identity — would either have to support the Democratic proposal or explain that they are opposing tax cuts for the middle class as a matter of principle because the cuts don’t also extend to the highest earners. Ugh.

House Speaker John Boehner, at some risk to his speakership, took a giant step toward the president by proposing a tax increase of $800 billion on the highest-earning Americans.Â  The new revenue would come from eliminating or limiting loopholes and tax deductions — which would have less of a negative effect on the economy than a straight increase in the top marginal rates.Â  As Kathleen Parker wrote,

Boehnerâ€™s good-faith attempts at a deal, offering new revenue through reforms as well as leaning toward some limited tax-rate increases, have been met with mockery. Obamaâ€™s laughable idea of a balanced deal includes taking control of the debt ceiling and doubling revenue demands, while offering little in the way of spending cuts.

To go along with the tax increase, the President actually is proposing a spending increase in the short run. The plan includes some new spending, and all of the proposed spending cuts would be delayed by a year, on the pretext of reducing the immediate impact on the economy.Â  A year is a long time, and Republicans today are likely to find themselves in the same boat as Ronald Reagan — agreeing to tax increases in return for later spending cuts that never happen.

A deal in the next 22 days looks highly unlikely. Obama holds the trump cards, and he’s shown no inclination to make any concessions.