Welcome, Andrew Sullivan and 3QuarksDaily readers. While you’re here, I hope you’ll take a look around and leave a comment! The “Labels” section in the right column can be used as a menu.

I’m a big fan of National Review Online’s group blog, called The Corner. It has been described as “the Id of Conservatism,” and it’s the first political blog I visit on most mornings. I visit multiple times on most days — there are a dozen or more contributors who participate with varying degrees of regularity, which means there is fresh content throughout the day.

Kathryn Jean Lopez, known as K-Lo, is the Editor of NRO. She’s also the most frequent poster in The Corner, and serves as its “Mother Hen,” keeping her predominately male colleagues in line when they spin off on tangents such as Star Trek discussions. [Sexist metaphor alert: This post contains politically incorrect, gender-specific references, starting with the headline. What can I say — I’m a man, and men are pigs.] I disagree strongly with Lopez on social issues (she’s an anti-abortion absolutist and opposes gay equality), but I admire her work ethic and I admire, evaluated as a whole, the product she produces at NRO.

But she made a cryptic post this morning that inspired me to drop everything and figure out what the heck it was about. She thereby called my attention to a column on her own site that she finds “embarrassing and outrageous,” and that I likely would not have seen otherwise. 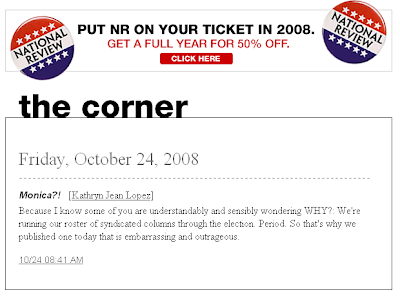 She doesn’t link to the column in question. Whatever could she be talking about? I had a hunch, but didn’t want to leap to a false conclusion. So I did some research.

Tempted though I am to document my sleuthing with step-by-step screen captures, I have actual professional obligations to get to today. So suffice it to say that I laborious opened each and every column listed under the daily “New on NRO” digest, below: 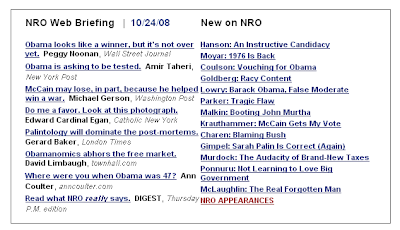 On each column I searched for the word “Monica,” and found it, as I expected, only on Kathleen Parker’s “Tragic Flaw” column. (Hence the “catfight” reference in the headline — they’re both women, get it? Har, har, har.)

A month ago, Kathleen Parker became one of the earliest and most prominent conservatives to go public with a strong condemnation of the Palin selection, saying she should withdraw for the sake of the party and her country. Pundits and bloggers on the Left gleefully plastered links to the column all over the Internets, while a few on the Right did so more in sorrow than in anger.

Gotta wrap this up, my phone keeps ringing — a happy problem for a self-employed writer/consultant. In today’s column, Parker suggests, without actually saying it in a quotable soundbite way, that McCain picked Palin because he thinks she’s a hot babe. The “Monica” in K-Lo’s headline, as you may have guessed, is a reference to Monica Lewinsky. Here’s the closing of the column:

It is entirely possible that no one could have beaten the political force known as Barack Obama â€” under any circumstances. And though it isn’t over yet, it seems clear that McCain made a tragic, if familiar, error under that sycamore tree [McCain apparently “proposed” to Palin under such a tree — Ed.]. Will he join the pantheon of men who, intoxicated by a woman’s power, made the wrong call?

Had Antony not fallen for Cleopatra, Octavian might not have captured the Roman Empire. Had Bill resisted Monica, Al Gore may have become president and Hillary might be today’s Democratic nominee.

If McCain, rightful heir to the presidency, loses to Obama, history undoubtedly will note that he was defeated at least in part by his own besotted impulse to discount the future. If he wins, then he must be credited with having correctly calculated nature’s power to befuddle.

K-Lo (and apparently some readers who corresponded with her) are outraged at the idea that Parker arguably has compared Sarah Palin with Monica Lewinsky, and by extension arguably has compared John McCain with Bill “Can’t Keep it Zipped” Clinton. One can certainly interpret the column that way, but I urge you to read the whole column and consider whether the Lewinsky/Clinton analogy is central to her thesis.

I think Parker is on to something — it boils down to “men are pigs.” I don’t think McCain is nearly as big a pig, in the sexual sense, as Clinton… but I think an analogous dynamic is at work. It’s the best explanation I’ve seen for throwing caution to the winds and making the disastrous Palin selection.

I’m not a Palin-basher either, btw, at least not in any absolutist sense… I criticized the choice the day after it was made (“The Five Stages of Adjusting to Palin“), then was wowed by her convention speech (pig that I am, no doubt) and tried to make the best of until Palin became too much of a national joke. Here’s a link to all of my Palin-related posts.

Update: From the comments, Pretty Lady (who blogs about relationships, sex, politics, spirituality and other matters) offers a thoughtful personal perspective on how men relate to, well, pretty ladies:

When I adopted my blog moniker, I thought of it as a staggeringly obvious and overtly ironic joke. I was shocked to discover that it was taken absolutely seriously by the vast majority of bloggers and their commenters, and that it entirely colored their initial take on my observations.

Simply, people pay much more attention to words coming out of the mouth of a Pretty Lady. They may reflexively deride those words, or fawn on them, but they are definitely responding to context, rather than content.

22 thoughts on “Catfight in The Corner! Lopez vs. Parker”