I just set the DVR to record Obama’s half-hour, blanket-the-airwaves infomercial, since I’ll be out when it airs. It’s a good reminder that I wanted to blog about a woman-bites-candidate story I saw on CNN.

I first became aware of the existence of Campbell Brown when she questioned the significance of Sarah Palin’s role as commander-in-chief of the Alaska National Guard. It struck me as a fair line of questioning, albeit certainly aggressive, but the McCain camp reacted by canceling McCain’s appearance with fellow CNN talking head Larry King. That’ll fix ’em!

To her credit, this week Campbell proved she can jump ugly in both directions:

One year ago, [Obama] made a promise. He pledged to accept public financing and to work with the Republican nominee to ensure that they both operated within those limits.

Then it became clear to Sen. Obama and his campaign that he was going to be able to raise on his own far more cash than he would get with public financing. So Obama went back on his word.

She even quoted an Obama supporter using the word “hypocrite” in describing the situation. You go, girl!

After a lively conversation in the comments of an earlier post, I’m tempted to go through Campbell Brown’s commentary line by line and look for anything that might be interpreted as “racial code,” but I suspect both she and her editors did that beforehand. If she were commentating on Fox News, people would be straining to find dog-whistle language in it.

And speaking of dogs and strained metaphors, my “woman-bites-candidate” reference is not racial code — it’s poking fun at left-leaning media. 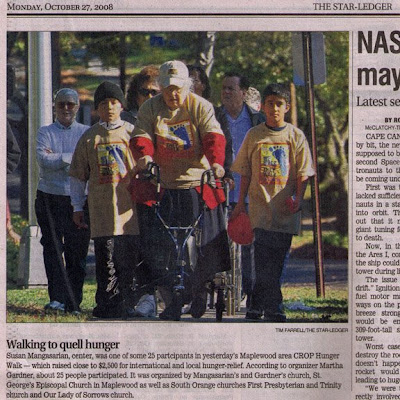 I know you must be just aching for yet another post boasting about my recent flurry of traffic from all over the world (where the heck is Malta?), but it’s time to go hyper-local for a moment. 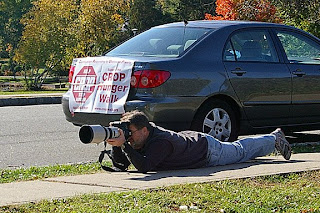 Previous walks have been covered in the local weekly, but this year — big-time PR guy that I am — it finally dawned on me that we might even be able to get some coverage in the Star-Ledger. After an advance call to a former co-worker from my ink-stained days in the 1980s, photographer Tim Farrell was dispatched with a long lens and a willingness to extend himself to get just the right perspective.

Susan later told a Star-Ledger reporter that fighting hunger has been a key issue for her since childhood. She was born in this country, but her parents were Armenian, and her mother often told her about how hungry the family was when they were surviving the Armenian Massacre in 1915. But the Ledger ended up running just a photo and caption, above. (No link, as the photo ran only in the print edition of the paper.)

That’s me, the paunchy guy in the middle — I’m saying, “you get what you need, Tim?” (That’s how big-time PR guys chat up the press.) The photos of Farrell are by my wife, the lovely Web Goddess, who also documented Susan’s two previous excursions. The Web Goddess also captured 56 seconds of live-action footage of this year’s walk.