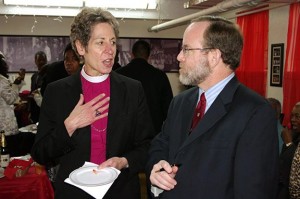 I teamed up with the Web Goddess on Sunday to produce a web report published today on a visit to a Jersey City parish by the Presiding Bishop of the Episcopal Church.

The occasion was a centennial celebration by Church of the Incarnation, launched in an era when black Jersey City residents had to travel to upper Manhattan to find an Episcopal church that welcomed them.Â  If the PB does something official in the Diocese of Newark, the Web Goddess is going to cover it, and I’m enough of a fan of The Most Reverend Katharine Jefferts Schori that I was willing to take an unpaid assignment.Â  Employing our usual division of labor, I did the words and the Web Goddess did the pictures — including the behind-the-scenes shot at the reception with your humble scribe above.Â  (That’s a shrimp tail on the PB’s plate.)

More behind-the-scenes tidbits: if you click through to the story itself, you’ll find a group photo of the PB with some young interns, and everybody is grinning broadly.Â  The smiles are because I, in my customary role as photographer’s assistant, am making bunny ears over the Web Goddess’s head while she takes the picture.Â  Works every time. I later told the spiritual leader of two million Episcopalians that making bunny ears is “the work I feel called to do.”