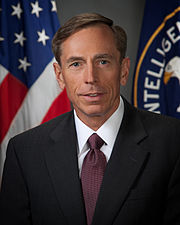 When a co-worker told me late Friday about General Petraeus’s resignation as CIA director, my immediate reaction was profound sadness.Â  Petraeus is one of the few public servants I’ve ever admired without reservation.Â  Now that’s been taken from me.Â  (Yes, it’s about me.)

Petraeus will still be remembered as one of the greatest generals in American history.Â  President Lincoln supposedly said of my friend’s great-great-grandfather, “I wish some of you would tell me the brand of whiskey that Grant drinks. I would like to send a barrel of it to my other generals.”Â  I have this fantasy of President Obama saying, “I wonder if we could find a hot biographer for some of my other generals?”

But back to me: I’ve followed Petraeus’s career off and on since he was a mere colonel walking around the Princeton campus with a briefcase in the mid-1980s.Â  That’s the detail I remember from the Princeton Alumni Weekly article about him — hey, there’s this guy who looks like he could be a well-dressed grad student, except he carries a briefcase.Â  Petraeus got two graduate degrees from the Woodrow Wilson School at Princeton University.Â  (I hope I’m remembering the details correctly — unfortunately, PAW articles from that far back are not available online.)

I’ve written about Petraeus a few times here, most notably in “Dog Bites Man: MoveOn.org Twists the Truth” and “â€œBarack Obama Better Be All Inâ€ on Afghanistan “. I know there are people who despise Petraeus, think he’s created a personality cult around himself, blah blah blah, I don’t care.Â  Petraeus won the war in Iraq, after taking over while it seemed to many — including a disgraceful Senate majority leader — that the war had been lost.

The silver lining in the Petraeus episode is that the debacle in Benghazi will finally get the attention it deserves.Â  (Note to Senate Intelligence Committee Chair Dianne Feinstein: If it was appropriate for Gen. Petraeus to testify in your closed-door hearing when he was CIA director, it’s no less appropriate now that he’s a private citizen.)Â  Here’s VDH with a handy list of questions you should ask:

â€œWe were beginning to sense that the crime of Benghazi (not listening to pre-attack requests for increased security; not sending help immediately from the annex to the besieged consulate; not rushing in additional military forces during the hours-long attack) and the cover-up (inventing the video narrative of a spontaneous demonstration gone wild to support a pre-election administration narrative of an impotent al-Qaeda, a successful Libya, a positive Arab Spring, and a cool, competent Commander in Chief, slayer of bin Laden, and architect of momentous Middle East change) were not the entire story of the 9/11/2012 attack: Why was there a consulate at all in Benghazi, given that most nations have shut down their main embassies in Tripoli? Why was there such a large CIA contingent nearby â€” what were they doing and why and for whom? Why did the ambassador think he needed more security when so many CIA operatives were stationed just minutes away? What was the exact security relationship between the annex and the consulate, and why the apparent quiet about it? Who exactly were the terrorist hit-teams, and did they have a particular agenda, and, if so, what and for whom? All these questions had not been answered and probably would have been raised during the scheduled Petraeus testimony â€” which is apparently now canceled, but why that is so, no one quite knows.â€

Regardless of whether the Petraeus testimony gets uncanceled, now the media is in the hunt. The Obama-supporting mainstream media had no stomach for Benghazi when they thought it might hurt their guy’s election chances.Â  Even after the election, until the Petraeus revelation, the media could think it would be potentially embarrassing (to the media) to dig into Benghazi too much, let’s move along, maybe there’s nothing there anyway.

But now? The CIA director admits to banging his biographer just days before he’s supposed to testify (behind closed doors) to a Congressional committee? I can practically hear some top editor at the New York Times: “HOLY CRAP!Â  Flood the zone! I want a reporter on every aspect of this story, we can’t let the National Enquirer scoop us like they did on John Edward’s love child! What’s the Congressional hearing about? Ben-whozi? Whatever, get someone on that too.”

I’m having some fun with this topic, but let me be clear (to borrow a phrase from my favorite currently-serving American president): Adultery is wrong.Â  He shouldn’t have done it.Â  I don’t know whether he initiated it or she did, but it doesn’t matter.Â  Even if she instigated the affair as relentlessly as Monica Lewinsky did, Petraeus still had a duty to resist (as did Bill Clinton).

But while what Petraeus did may be inexcusable, it’s not unforgivable. I forgive him for the minor transgression of tarnishing one of my heroes.Â  I hope his wife will forgive him for his far-worse offense against her. My faith tells me God will forgive him.Â  And unless something far worse emerges out of the coming feeding frenzy, I have no doubt history will forgive him, too.