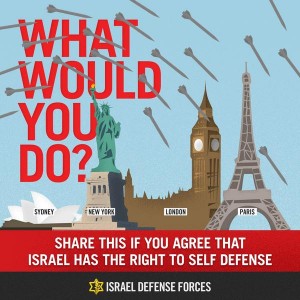 It’s on. If there’s an over/under on how long it will be before Israel sends its mobilized ground troops into Gaza in its rekindled war with Hamas, put me down for five days. (Update: Oops.)

President Obama seems to be saying exactly the right things:

“Israel has every right to expect that it does not have missiles fired into its territory,” Obama said at the start of a three-nation tour in Asia.

“If that can be accomplished without a ramping up of military activity in Gaza, that’s preferable,” he said. “It’s not just preferable for the people of Gaza. It’s also preferable for Israelis, because if Israeli troops are in Gaza, they’re much more at risk of incurring fatalities or being wounded.”

Yes, it would be nice if stopping the missiles could happen without “ramping up.” But does anyone seriously think that Hamas will quit firing missiles? (A tactical pause of a few days doesn’t count — I mean, Hamas needs to stop firing missiles.) 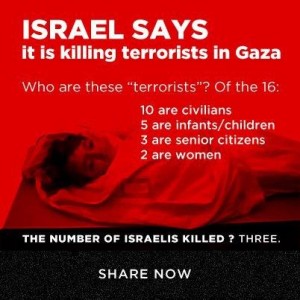 Israel and Hamas are both using social media to make their cases, as you can see from the graphics accompanying this post. (If you get this blog by RSS feed, thanks! But you’ll probably need to click through to the blog to see the graphics.)

This isn’t Israel vs. Palestine, it’s Israel vs. Hamas. Hamas may have won an election in the Gaza Strip, but they’re an occupying power, not a representative government. (Anybody expect Hamas to hold another election anytime soon?)

I’ve said it before and I’ll say it again: “I Stand With Israel.”