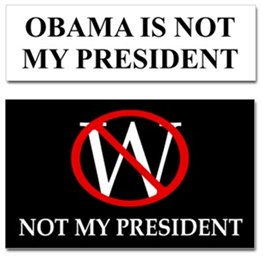 Whether it's Bush or Obama, if he is not your president, then you are not my countryman

Congratulations, Mr. President.Â  I voted for the other guy, but I wish you well — and if you had to win, I’m deeply relieved that Florida doesn’t matter this time.

Once again, you’ve inherited a mess from your predecessor.Â  This time, you won’t be able to get as much mileage from blaming him.Â  One of the beauties of our two-party system is that eventually, both parties end up sharing the responsibility for every major issue.

Unlike some of your critics, I don’t think your re-election is a disaster.Â  Even though you’ll continue to be the most powerful person in the world, you are not powerful enough to inflict serious long-term damage on America.Â  We survived Nixon’s thuggery, Carter’s ineptitude and Clinton’s reckless sexual predation, and we’ll survive Obamacare and anything else you may throw at us.

To me, Obamacare was the most important reason to defeat you.Â  The day before the election, Christopher DeMuth described the stakes as he saw them:

On Tuesday, Americans will go to the polls to choose whether or not to nationalize their health-care system. …

If President Barack Obama is re-elected, ObamaCare’s controls over doctors, hospitals, pharmaceutical firms and other providers of medical care will be tightened, and the operations of private insurance companies will be progressively restricted. Everyone involved will know where the process is goingâ€”to a single-payer system or one with a few chosen insurers subject to national public-utility controlsâ€”and will negotiate the best possible accommodations to it. Within a few years, a new political equilibrium will be in place, making the system irreversible and subject to only marginal adjustment. 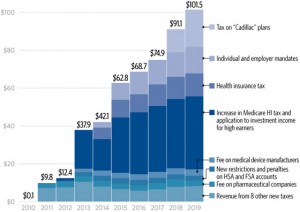 Well, maybe.Â  I sure wish we had elected a Republican president and enough Republican senators to overturn Obamacare altogether, but we did not.Â  However, opposition to socialized healthcare is not going to go away. When the tax increases start kicking in a few weeks from now, you may find that your predecessor has bequeathed you a healthcare system so deeply unpopular that you may not be able to enforce party discipline to protect it.

I’m also not overly worried about continuing to entrust you with our national security — although again, I would have preferred the other guy as commander-in-chief.Â  Despite the ridiculous Nobel Peace Prize, you’ve steered well clear of the moral bankruptcy of pacifism.Â  To your credit, you green-lighted the risky takedown of Osama bin Laden, rather than taking the safer route of a Predator missile — and you’ve used those Predators to take out thousands of enemy combatants.Â  You retained Bush’s defense secretary and his strategy for Iraq, and mimicked his surge in Afghanistan.

Heck, you even started a totally unnecessary war in Libya, where we had no national interests at stake.Â  I don’t want to encourage unnecessary wars, but at least this one got rid of a very bad man, and up until Benghazi it seemed to be turning out all right.Â  Your administration’s inattention to a deteriorating situation cost four brave men their lives in Benghazi.Â  But at the risk of sounding flip, all presidents make mistakes that get brave people killed.

If America never uses its military strength, then all that money spent on defense truly is wasted.Â  On balance I think your Libya adventure was probably unwise, but I like my presidents to have a bias toward action in the face of evil people.Â  When, not if, the war with Iran enters its kinetic phase, I’m confident now (as I was not in 2008) that you will not preemptively surrender.Â  And despite your occasionally shoddy treatment of our ally Israel, I have no doubt which side you’ll take.Â  Even during the crucible of the final weeks of the campaign, you’ve already started laying the ground work for war, through joint exercises with Israel and by condoning Israel’s attack on a weapons plant in Sudan.

You have a tough job ahead of you, Mr. President.Â  So did your predecessor.Â  However wrong-headed some of your policies may be, I believe you to be a good and decent family man, a person of substance, and a person dedicated to doing what you believe is right for America. I can’t find the link now, but to paraphrase another voice on the right: The fact that our political system has given us a choice of two such candidates is a testament to the enduring strength of America.

Good luck, Mr. President, and may God watch over you and those you serve.