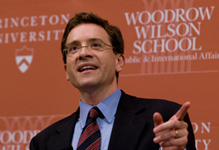 “Obama Faces Risk of Wartime Presidency” — so reads the headline on a CNN commentary by Princeton professor Julian Zelizer.Â  I have no quarrel with most of it — the professor provides a useful and balanced review of how “war sucks the political oxygen out of almost any presidency,” citing LBJ and the Great Society, Truman’s long-forgotten domestic agenda, et cetera.Â  But the headline…

Authors (except for bloggers!) normally don’t get to write their own headlines, and I was inclined to cut the good professor some slack, but a variation of the jaw-dropping headline is in his text as well.Â  With his anticipated decision to send more troops to Afghanistan, Zelizer writes, “Obama inches closer to becoming a wartime president.”

Gracious.Â  At the risk of belaboring the gob-smackingly obvious, Mr. Obama became a wartime president on January 20.Â  If you don’t want to be a wartime president, don’t run for the office while America is prosecuting an Iraq WAR, an Afghanistan WAR, and a broader Global WAR on Terrorism (although they seem to have redefined that one out of existence).

The true risk, and the reason some of us favored John McCain for the role of Commander-in-Chief, is that Obama and many Democrats seem intent on convincing us that America is NOT at war.Â  This is why the indefensible decision to treat Khalid Sheikh Mohammed as a criminal, rather than as an enemy, is so appalling.

I’ll necessarily be away from the television tonight when the president lays out his plan for Afghanistan, but I’m setting the DVR to record, and I suspect I’ll watch it before my head hits the pillow tonight.Â  Earlier in his term, President Obama showed at least an occasional ability to put pragmatism ahead of partisanship when it comes to foreign policy.Â  I’m clinging to the hope that he will begin to do so again tonight, regarding the conflict he rightly called “a war of necessity.”

I’m not so much worried about the number of troops.Â  If Obama authorizes 30,000 instead of the 40,000 that his hand-picked general requested, I don’t see that as a half measure — it’s quite a bit more than half.Â  What I’m looking for tonight is a sense of commitment to victory.

2 thoughts on “Dumbest Headline of the Day, as the Afghanistan Speech Looms”