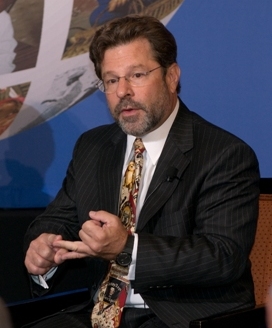 I’ve blogged before about FDD Update, the outstanding weekly newsletter of the Foundation for Defense of Democracies.Â  This week’s edition is especially rich with clear-eyed thinking on the global struggle against Islamic fascism.

I could post about several entries, but I’ll confine myself to excerpting Cliff May’s takedown of a drivelous U.S./Muslim body count comparison:

[Stephen] Walt concludes: â€œ[T]he United States has killed nearly 30 Muslims for every American lost. The real ratio is probably much higher, and a reasonable upper bound for Muslim fatalities (based mostly on higher estimates of â€˜excess deathsâ€™ in Iraq due to the sanctions regime and the post-2003 occupation) is well over one million, equivalent to over 100 Muslim fatalities for every American lost.â€

He quotes an unnamed “prominent English journalist” who, he says, has articulated his point â€œquite simply.” “If the United States wants to improve its image in the Islamic world,” he said, “it should stop killing Muslims.”

Moral relativism is hardly uncommon in todayâ€™s political discourse, but refusing to differentiate between American troops trying to feed starving Somalis and Somali terrorists trying to stop the feeding program really does take the cake, so to speak.

Itâ€™s also revealing that Walt neglects to ask how many Muslims have been killed by Saddam Hussein, by al-Qaeda, by Iranian proxy death squads in Iraq, by the Taliban, and by other radical Muslim groups.

There is no recognition by Walt that in recent years Americans have sacrificed lives and treasure to save Muslims from tyranny and carnage in Bosnia, Kosovo, Kuwait, Somalia, Iraq, and Afghanistan — and, yes, Muslims were killed in the process because in each of these cases, except Bosnia and Kosovo, Muslims communities were threatened by radical Muslim groups or regimes.