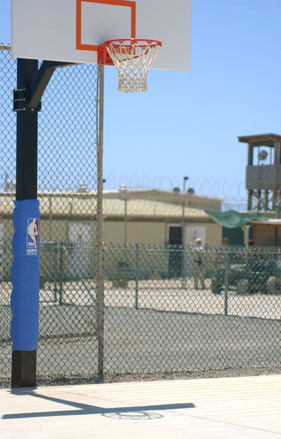 The good people of Thomson, Illinois, are eager for the jobs that would be created if the Obama administration moves some of the prisoners held at Guantanamo to the Thomson Correctional Center.

To pre-empt security concerns, the feds say the underutilized facility “will be enhanced to exceed perimeter security standards at the nationâ€™s only â€™supermaxâ€™ prison in Florence, Colorado, where there has never been an escape or external attack.”

But the detainees themselves seem to want to stay put in Gitmo.Â  And who can blame them?

The 221 remaining inmates [at Gitmo] receive between four and 20 hours outdoor recreation in the Caribbean sun and anything from weekly to almost unlimited access to DVDs and receive three newspapers (USA Today, plus one Egyptian and one Saudi Arabian title) twice a week. Every bed has an arrow pointing towards Mecca and every cell a prayer rug. …

The detainees’ diet is exclusively Middle Eastern and halal, in observance of regional and religious sensitivities. Dates, olive oil and honey are provided daily and pita bread is baked on the premises. They drink the same bottled water as the prison’s staff and have the same access as other prisoners to 16,000 books and 1,600 magazines held at the library. …

At the low security Camp 4, detainees could be seen sitting in the yard chatting and hanging up their laundry. A new gravel football field was recently completed.[If they were moved to the supermax facility in] Florence, Colorado, prisoners would also spend 22 Â½ hours a day in a 9ft by 9ft cell with the only natural light coming from a skylight outside.

Exercise would be limited to an hour and a half indoors five days a week and they would have minimal contact with others.

So in pursuit of the political and diplomatic benefits of closing the hated Guantanamo — albeit more slowly than promised — the administration appears prepared to subject the detainees to much harsher conditions.

While I savor the irony, I’m not particularly opposed to transferring the detainees to Illinois.Â  I’m sure they can be housed securely there, and realistically, the closure of Gitmo is inevitable.Â  A much more serious security concern is the administration’s indefensible plan to try Khalid Sheikh Mohammed and some (but not all) of the other detainees in criminal court.

(Gitmo photos from the Defense Department)