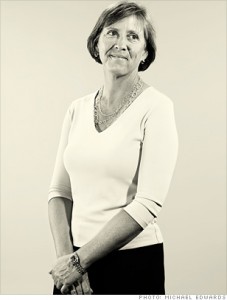 Mary Meeker, the early Internet visionary who endured derisive criticism when she (correctly) predicted that Ebay’s stock would soar to more than $400*…

No, that doesn’t sound right.Â  Off to Wikipedia to refresh my memory.

I’m a huge Wikipedia fan, btw, and I have no patience for whining complaints to the effect that “Wikipedia isn’t authoritative because anybody can change it.”Â  In anticipation of such whining I rarely cite Wikipedia as an authority, but Jimmy Wales’s* brainchild is a global treasure nonetheless. It’s easy to get distracted following one link after another, but Wikipedia is a far better starting point for most research than Google is. It’s no accident that Wikipedia shows up on the front page of most many** simple Google searches.

Where was I?Â  Oh yes, Meeker — I’m writing a post about her recent epic analysis of America’s financial statements, the blandly titled* “USA Inc.: A Basic Summary of America’s Financial Statements“.Â  And wow, Wikipedia just saved me from TWO mistakes in a single scene-setting introductory clause.Â  The stock in question wasn’t eBay*(capitalization corrected), it was Amazon… and it wasn’t Mary Meeker making that prediction, it was Henry Blodget.

(Here’s an example of why Wikipedia should be the starting point, not the ending point, for any serious research.Â  Although I had the wrong company and the wrong person, I clearly remember the hubbub around Blodget’s 1998* prediction that a prominent Internet stock — already considered vastly overpriced by Internet skeptics — would soon soar to $400.Â  Blodget’s Wikipedia entry, however,Â  says* this: “In October 1998, he predicted that Amazon.com’s stock price would hit $40 (which it did a month later, gaining 128%).”

Hm, I wonder how Blodget’s prediction has held up over the years on a split-adjusted basis?*

Let’s start by fact-checking my 10-for-1 split theory. Whoa… Amazon’s investor relations site* says the stock has split three times in the company’s history: 2-for 1, 3-for-1 and 2-for-1.Â  Repeated stock splits have a multiplicative effect — hey, I learned a few things in 15 years as a Wall Street corpcomm gumby — and there is no combination of those three stock splits that multiplies to 10.Â  Turns out the first stock split was before Blodget’s prediction and the other two were afterward.***

So that implies a total of 6-for-1, and the $40 price isn’t split-adjusted, it’s just wrong. I’m a Wikipedian — I should go correct it! Except you’re not supposed to do original research for a Wikipedia article.

And I’m not confident about the 6-for-1 factoid.Â  Nothing affects a stock’s cost as dramatically as a split, but other events can tweak the cost-basis calculation — buybacks, special dividends, etc.Â  I don’t know how to do the calculations**, but I know how to find someone who does.Â  On May 23, 2007*, the New York Times’s respected**** “DealBook” column stated:

Henry Blodget, the former Internet analyst, is taking some pride from a little-noticed milestone … shares of Amazon have risen back above $400.

More precisely, they broke $400 after being adjusted for stock splits: the online retailerâ€™s shares were trading at $71.61 at midday Wednesday. Thatâ€™s the price target that Mr. Blodget set for the company back in 1998, in what may be the most famous stock call in history.

(Hm… digging up that factoid took well over an hour, and it’s tangential at best to my topic.)

Onward! Meeker’s early claim to fame was as lead author of a groundbreaking 1995* primer that was blandly titledÂ  “The Internet Report.”

Wikipedia’s fairly brief entry on Meeker yields the following nugget*, which seems pertinent to this post:

Meeker was characterized by Andy Serwer in Fortune magazine in 2006 as “absolutely first rate when it comes to spotting big-picture trends before they come into focus. She gathers massive amounts of data and assembles it into voluminous reports that, while sometimes rambling and overambitious, are stuffed with a million jumping-off points.”

“Massive amounts of data” and “voluminous reports”: Check, and check.Â  “The Internet Report” was 322 pages*, and the spark of an idea for this blog post was when I noticed that a key chart in her latest masterpiece is part of a slide deck totaling a bizarre 447* slides.

Meeker has applied her background as a securities analyst to examine the federal budget and balance sheets as though the U.S. were a company.Â  Here’s slide # 49: 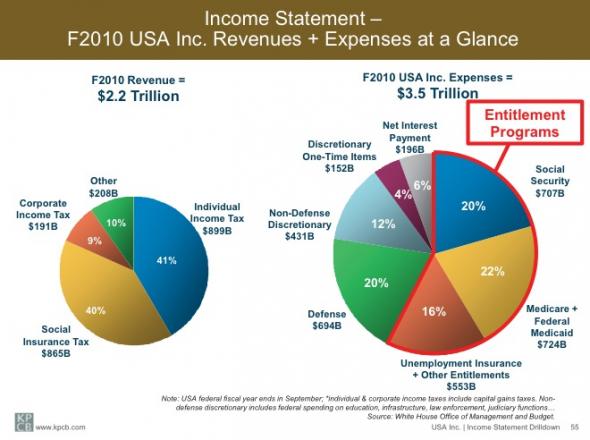 Note the red line around the three huge pie pieces to the right.Â  They represent spending on entitlements — Medicare, Medicaid, Social Security, unemployment insurance.Â  Entitlements collectively are nearly three times the size of defense spending, and entitlement spending is only going to accelerate as Baby Boomers move into retirement.Â  In fact, Meeker writes* (Slide 14): “Within 15 years (by 2025), entitlements plus net interest expenses will absorb all — yes, all — of USA Inc.’s annual revenue, per CBO.Â  That would require USA Inc. to borrow funds for defense, education, infrastructure and R&D spending.”

I came across the chart on FaceBook via the blogger TigerHawk — I am FaceBook friends with his not-so-secret identity.Â  He linked to an article about the analysis by Henry Blodget — hey, maybe that’s how I got confused!

Unlike me, TigerHawk “gets” blogging.Â  Here is the full text* of his post about the chart:

I propose a new rule: Any federal politician of either party who claims to care about our fiscal condition who is not also proposing steep reductions in entitlements is transportingly disingenuous and ought to be voted out of office.
More here. The link explains why “the U.S. is screwed,” but we are only screwed if we lack the courage to tame this monster. Until this problem is solved, no federal politician should ever again leave a meeting with constituents without having to answer the question “what is your proposal for reducing entitlements?”

* Indicates a place where I interruptedÂ  the flow of writing to do more research — often just confirming a fact or spell-checking.Â  After more than 400* substantive blog posts over two and a half years, I’ve realized that I just don’t “get” blogging.Â  The whole point is to make quick observations, right?Â  Some famous blogger (Andrew Sullivan?) once said that an average blog post should not try to make more than one point.Â  Check my headline: Fail!

**Indicates a place where I talked myself out of doing additional fact-checking.

*** Indicates a place where I feel entitled to more asterisks because I actually did quite a bit of research.

**** Meaning, I respect it today because it’s helping me make a point.

I propose a new rule: Any federal politician of either party who claims to care about our fiscal condition who is not also proposing steep reductions in entitlements is transportingly disingenuous and ought to be voted out of office.

More here. The link explains why “the U.S. is screwed,” but we are only screwed if we lack the courage to tame this monster. Until this problem is solved, no federal politician should ever again leave a meeting with constituents without having to answer the question “what is your proposal for reducing entitlements?”

2 thoughts on “Mary Meeker, Entitlements, Wikipedia Drift, and Why It Takes Me Three Hours to Write a Blog Post”