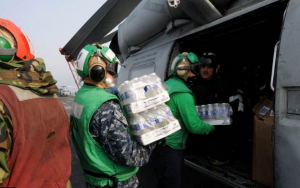 Sailors load relief supplies on a helicopter on the USS Ronald Reagan. No, Harry isn't in the picture -- at least I don't think so. Photo: Facebook

Aviation Boatswain’s Mate Third Class Harry Petersen turns 23 today, and he’ll celebrate by working his butt off all day long.Â  He’s one of about 5,000 Navy personnel on the USS Ronald Reagan, currently engaged in disaster relief efforts off the coast of Japan. I’ve previously written about my son here, here and here.

In olden days, families of seafaring men would hear no word from their sailors for months on end. That was before Facebook.Â  Harry doesn’t get to spend much time on the few internet-connected computers in the onboard library, but he managed a quick note shortly after the tsunami hit.Â  I had posted a link to a news story saying that the Reagan was headed for Japan, and Harry replied, “Yeah crazy stuff out there, i guess the news already said whats happening with the ship, we are safe. The water is really wavy, miss you guys thanks everyone!”

The Reagan’s commanding officer, Capt. Thom Burke, apparently has more internet access — he posted a lengthy message reassuring family members that everyone on the crew is safe.Â  This was in the wake of news reports that 17 sailors had been exposed to radiation from the Japanese nuclear plant.

As a nuclear-powered aircraft carrrier, we have extensive technical expertise onboard to properly monitor such types of risks, and if necessary, rapidly resolve the situation.

We have taken all the necessary precautions to ensure that everyone is safe. We have closely monitored spaces, evaluated everyone who has flown or worked on the flight deck and cleaned the aircraft.

I have not seen any levels of radiation or contamination that would cause me to have any significant concerns at all.

As we continue to assist Japan in this terrible catastrophe, our Sailor’s–and your loves ones’– safety will remain at the top of my priority list.

Be careful out there, son.Â  I’m proud of you.

Update: Harry has checked in again on Facebook.Â  His latest missive, in its entirety: “DEPLOYMENT BIRTHDAY!!!! WOOOOOOOOOO!”

Harry Petersen Yeah crazy stuff out there, i guess the news already said whats happening with the ship, we are safe. The water is really wavy, miss you guys thanks everyone!