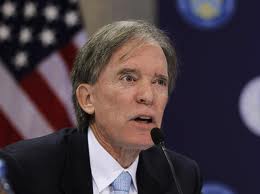 In the midst of the coverage this past week of the various pathologies of Muammar Gaddafi, the Wisconsin legislature and Charlie Sheen, some of the most ominous news was largely overlooked.

It’s hard to overstate the iconic status of U.S. Treasury Bonds as a safe haven for investors.Â  For generations, the Treasury’s 30-year “long bond” was the talisman of the debt markets, although that role in recent years has been taken over by 10-year Treasurys.Â  Think of Treasurys as the debt-market equivalent of the Dow, only more so.

In National Review’s The Corner, where I first saw these two events linked, Cornerite Andrew Stiles explains the danger:

If fewer people are willing to lend us money, the more weâ€™ll have to shell out in higher interest payments. And if bond buyers lose confidence in our ability to make good on that debt, things could get really ugly, really fast. Much more on this from Kevin Williamson here.

As Sen. Tom Coburn (R., Okla.), who served on the deficit commission and supported its recommendations, pointed out at a press conference this week, the United States has, historically, paid an average of 6 percent interest on its debt. It currently pays about 2 percent. If rates were to return simply to that historical average, it would involve an increase to our overall interest bill of $640 billion â€” to be paid immediately. â€œAn impossible situation,â€ in Coburnâ€™s words.

He quotes Gross on CNBC:

â€œWeâ€™ve moved into Brazil and Mexico and moved money, yes, at the margin into Spain, which has a better balance sheet than the United States,â€ Gross told CNBC. [emphasis added]

We’re quickly moving toward a situation where the combination of net interest payments and spending on entitlements (Medicare, Medicaid, Social Security, etc.) will absorb all of the government’s revenue.Â  The Ponzi scheme known as Social Security probably is the easiest part of the equation to solve.Â  But the Obama Administration, which made the problem much worse with its bloated and dishonest “Porkulus” legislation,Â  has made clear that it does not think Social Security has a problem.

In the early days of the Clinton Administration, Clintonista James Carville famously said, “I used to think if there was reincarnation, I wanted to come back as the president or the pope or a .400 baseball hitter. But now I want to come back as the bond market. You can intimidate everybody.”Â  I fear a new generation of politicians is going to have to learn the hard way that the intimidation is appropriate.