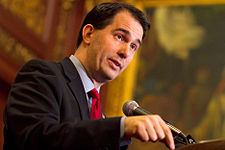 [Walker’s] bill, which already had passed the state Assembly, would bar public workers other than police and firefighters from bargaining for anything other than wages.

Raises would be capped to the rate of inflation, unless state voters approve. The legislation also would require unions to hold a new certification vote every year, and unions would no longer be allowed to collect dues from workers’ paychecks.

I’ve been a union member twice in my life now — first the Newspaper Guild, where we did not have payroll deduction for union dues, and, briefly, the United Food and Commercial Workers union, where we did.Â Â  Sure is a lot easier to collect union dues if the company is forced to take them out of workers’ paychecks.

Wisconsin’s union reforms are a good first step toward eliminating public sector unions altogether.Â  Politically powerful public unions back Democratic politicians by rallying campaign works and contributing millions of dollars.Â  Every dollar the public union has comes from taxpayer money, so unions are a mechanism for charging all taxpayers for the campaign expenses of the party of big government.Â  Then at the bargaining table, both labor and management have a stake in bigger government.