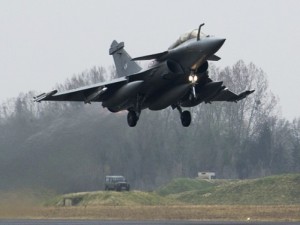 It’s like I’ve emerged from a coma into a parallel universe, where the United Nations takes a leadership role in a crisis, and the French — the French! — back up their stern words with military action.

Where was this United Nations in 2003, when the time came to enforce 17 stern resolutions against an even badder bad guy?

A week ago, I wrote “the chance that this Administration will intervene militarily is close to zero.”Â  It didn’t even occur to me to lay odds on the likelihood of action by the UN and the French.Â  I guess I’m going to have to stop snarking about the “Freedom doors” that divide my church’s parish hall.

In that prior post, I quoted an Eliot Cohen op-ed that said “the lesson of decades is that NATO and the United Nations find it impossible to act without American leadership.” Are we going to have to learn a new lesson?

I don’t want to get ahead of ourselves here — as I’m writing this, the entire French offensive apparently consists of one missile strike on a tank.Â  And I’m not ready to concede that Obama has ushered in a new era of international solidarity.Â  But I also think that in the face of this, Obama opponents need to be careful about sneering at the administration for a lack of leadership.Â  As Max Boot wrote at Contentions, the Commentary magazine blog:

I have been critical in recent days of President Obama for lack of leadership on Libya but I part company with some of my colleagues on this blog in that I sense this is changing. True, he waited for the UN Security Council to come together before acting in Libya, thereby losing vital time. But the legitimacy the UN confers should not be underestimatedâ€”much as it may pain me (and other critics of the UN) to admit it. Having the Arab League on board is also a plus. There is even talk that Qatar, UAE, and Jordan may participate in a military campaign against Qaddafiâ€”good news if true, although, as autocracies (if relatively benign ones), they are hardly shining exemplars of the â€œnew Middle East.â€ Most important of all, France and Britain appear prepared to take on a major part of the military burden.

All in all, I give Obama credit for assembling an impressive coalition, and avoiding a Russian or Chinese veto at the Security Council. The question is what he does with the authority of Resolution 1973.

“He” — Obama — may or may not do anything.Â  But the French have stepped up, and given the reality of a war-weary America, that seems like a very positive development.

Update: Just a few hours later, it seems like the U.S. is back in the driver’s seat, although the game plan seems to be to put the French and British in charge once the Tomahawking is done.Â  Meanwhile, I wish I had come up with this brilliant headline: “Nobel Peace Prize Winner Enters Third War” (via Instapundit).