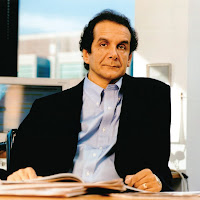 Long-time readers (hi Sweetie!) know how much I admire Charles Krauthammer’s writing. I’ve said that when I read his columns, I often wish I had written them first. Well, now that fantasy has partly come true.

Krauthammer’s column today covers some of the same ground as my post Wednesday on Obama’s mixed signals to the Muslim world. (No, I am not so delusional as to think he got the idea from my blog, which weighs in at 213,974th in Technorati’s blog rankings. I’m just tickled that we’re on the same wavelength.)

We both reacted to Obama’s statement that he wants to return to “the same respect and partnership that America had with the Muslim world as recently as 20 or 30 years ago” by noting that the Iran Hostage Crisis began 30 years ago. Despite Obama’s implication that his predecessor’s administration was hostile to Muslims, we both noted that Bush prominently reached out to Muslims six days after 9/11.

Here’s an additional Krauthammer point that I wish I had made:

In these most recent 20 years — the alleged winter of our disrespect of the Islamic world — America did not just respect Muslims, it bled for them. It engaged in five military campaigns, every one of which involved — and resulted in — the liberation of a Muslim people: Bosnia, Kosovo, Kuwait, Afghanistan and Iraq.

6 thoughts on “You (Could Have) Read It Here First”