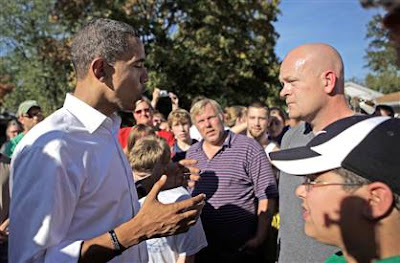 There’s already plenty of opposition to Obama in the right-wing fever swamps of the Internets, of course. (I would link that sentence to Ann Coulter’s site, but she’s such a cartoon character, I don’t want my vast audience to give her any traffic. That’ll fix her.)

But eventually, even mainstream media outlets will turn their guns on the man who, in the eternal formulation of insider Washington, will become known as “this President.” No matter how much the media was in the tank for Obama during the campaign, no matter how enthusiastic they were in celebrating the coming of BAM-A-LOT, eventually Obama and his Administration will make missteps that even the most liberal papers cannot ignore.

We’re not there yet, but there are early signs. In the current dust-up over Treasury Secretary Timothy Geithner’s tax problems, even the left-wing Seattle Post-Intelligencer editorial page has admitted there is a double standard. “We can only imagine what we would have said had Geithner been a Bush appointee,” the paper editorialized. As if worried that the Obama Fan Club might revoke the paper’s decoder ring, the editorial quickly added: “Should this news derail the nomination? Probably not.” (Hat tip: Taranto)

As it happens, I agree that the news should “probably not” derail the nomination. The position is critically important, and Geithner seems to have done an outstanding job coping with the financial crisis as President of the NY Federal Reserve. But Taranto points out that Geithner actually accepted reimbursement from his employer for self-employment taxes that he did not pay, which if true makes it seem more serious than a mere mistake.

The starkest irony in this is the difference between the journalistic soft shoe over the tax problems of the man nominated as head tax collector, compared with the instant feeding frenzy that erupted during the campaign over minor tax issues when an ordinary citizen posed a challenging question to The One.

The difference now, of course, is that journalists no longer have to worry that Obama might lose the election. Now the natural competitiveness of the news media will begin to overwhelm partisanship, at least until the 2012 race heats up. The honeymoon isn’t over yet, and it certainly won’t end before the Inaugural. But starting next Tuesday (ok maybe Wednesday), when President Obama doesn’t bring the troops home, doesn’t close Guantanamo, doesn’t end the recession, doesn’t deliver national health insurance, doesn’t roll back global warming and make the oceans recede — or at least doesn’t do any of these things as fast as the Left would like — then things like the peccadillos of Tim Geithner will start to get more coverage.