Have you heard about the (pro-) gay-rights bill our President signed right before Christmas? Probably not, if you rely on the mainstream media for news. In fact, even the blogosphere has been strangely quiet about it, although Gay Patriot launched an item about it this morning.

His succinct wrapup (a reference to Don’t Ask, Don’t Tell):

(Welcome, readers of TheDonovan.com, a.k.a. Castle Argghhh. If you’re a fan of “Jonah’s military guys,” you might be interested in my October post about that site, “In Praise of Milbloggers, and of the Iraqi Air Force”. And a warm welcome as well to Wired and Mudville Gazette readers.)

In an earlier post (“Israel Turns to Social Media in Fight against Hamas“) I described how the Israeli Consulate in New York is using Twitter in the battle for public opinion regarding the conflict that partisans on both sides seem to be calling the “War on Gaza.”

It turns out there’s some social media savvy on the Palestinian side as well.

GazaTalk.com (warning: if you click around on the site you’ll see gruesome photos) launched January 1. I discovered it at about 5 a.m. January 5 (today), via a link in the tweetstream of Beshr Kayali. I have no idea who he is beyond the fact that his Twitter page says he’s in Damascus, and because I need to wrap this up quickly before a busy workday, I’m not going to research it.

The GazaTalk.com homepage features the death toll scorecard badge above, along with links to articles, blog posts, pro-Palestinian “Gaza Tweeters” and more.

(Disclosure: I’ve made clear where my own sympathies lie in this conflict. For this post, I’m setting aside my political views to focus on social media.)

If you click on the image below, I think you’ll see a much-larger version of it. (Works on my machine, anyway, but I’m still a newbie blogger and I don’t know if it will work for you. Give it a shot, then come back here to continue the text.) 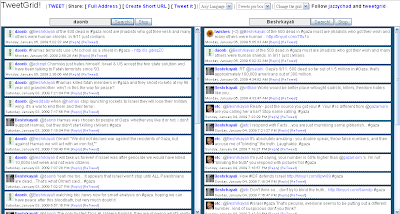 By using Tweet Grid — one of the many independent sites that have sprung up to leverage Twitter’s tweetstream — I’ve collected the most recent tweets from both Kayali and from Benny Daon. I don’t know anything about him either, but he gives his location as Tel Aviv.

The large screenshot (if you can see it) shows Daon and Kayali parsing the nuances of the conflict in 140-character tweets. Here’s a text version of one exchange:

Translation: Kayali is re-tweeting (“RT”) a tweet from someone else (“@ysalahi”) which compares the Gaza death toll with the 9/11 death toll, based on the respective populations of Gaza and the U.S. (If anyone cares about what I think about this argument on a substantive level, please inquire in the comments — I’m staying neutral in the body of the post.)

Daon fires back with a different take:

daonb: @Beshrkayali of the 500 dead in #gaza most are jihadists who got their wish and many others were human shields. In 9/11 just civilians

One last observation, then I’ve gotta wrap this up. Daon and Kayali both press their cases in highly partisan language. Maybe it’s wishful thinking, but I think I detect a hint of grudging respect and even camaraderie in this exchange:

daonb: @Beshrkayali watching bbc news now for smart analysis on #gaza. hoping we can have peace after this bloodbath, but very much doubt it

Beshrkayali: @daonb Yeah me too… It appears that Israel won’t stop until ALL Palestinians are dead… That’s what Olmert said… #gaza

The two sides in the Gaza War may not be negotiating, but at least they’re tweeting.