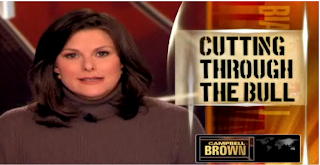 As I’ve said before, I expect now that Obama is safely ensconced at 1600 Pennsylvania Avenue, the cutthroat competitiveness of the news media is going to drive more and more reporters to go after the only President we have.

Campbell Brown has a show on CNN called “No Bias, No Bull.” When you market yourself that way, you have to be prepared to smack down anybody, “without fear or favor, regardless of party, sect, or interests involved,” in the immortal words that used to guide The New York Times. To her credit, Brown is a rare example of a mainstream journalist who actually took a hard shot at Obama before the election — dinging him for rejecting campaign finance limits once it became clear that Obama’s fund-raising power was much greater than McCain’s. She even quoted an Obama supporter saying the flip-flop met the definition of a “hypocrite.”

She raised the stakes in a commentary on last night’s show, using the H word without the fig leaf of attributing it to someone else. The piece, which describes how the administration is seeking a waiver from its own restrictions on hiring lobbyists, is available today on CNN.com, under a headline “Commentary: Obama’s Hypocrisy is Showing.”

Don’t make your disdain for lobbyists and your pledges that they won’t wield influence in your administration a centerpiece of your campaign.

It’s the hypocrisy and the double-talk that makes so many of us so cynical. Do what you think is best for the country. Just be straight with us about how you’re going to do it.

(To be clear, there was a flurry of commentary when the administration first sought a waiver to the lobbying rules just a day after promulgating them. But this is the first time I’ve seen such sharp criticism on the issue from a nominally nonpartisan source.)

While the revolving door between government and lobbyists can be unseemly, lobbying is a form of free speech. Some regulation of lobbying is appropriate, and government officials need to make a special effort to seek out the opinions of people and groups that cannot afford a fancy office on K Street. But the reason why lobbyists are able to command high salaries for plying their trade is that they have substantial expertise in the ways of Washington and the business interests of their employer — it would make little sense to exclude such people from the government completely.

Interestingly, the lobbyist that sparked Brown’s commentary is intended to be chief of staff for Treasury Secretary Tim Geithner. I haven’t returned to the subject of Geithner since writing, just after the tax controversy first surfaced, that I didn’t think his tax “peccadillos” should sink his candidacy. Geithner has been confirmed, but I’ve changed my mind about his suitability for the office he now holds. The turning point for me was reading the objections of the three Senate Democrats who voted against his confirmation. As Sen. Tom Harkin said:

He has stated this was an innocent mistake and that there was no intent to deliberately avoid paying the required taxes. However, the IMF informs us that in order to avoid exactly this kind of situation, its U.S. citizen employees are fully informed of their obligation to pay Social Security and Medicare taxes and must sign a form acknowledging that they understand this obligation.

Geithner failed to pay the required taxes for four successive years. When the problem was discovered, he was billed for back taxes only for the last two of those years, because the IRS statute of limitations had passed on the earlier two years. He finally settled up for the earlier two years only after being nominated as Treasury Secretary.

I hope this guy does a really good job managing the financial crisis. Even if he does, I don’t think it will be enough to justify the fact that the man we’ve put in charge of overseeing the IRS appears to be a tax cheat.