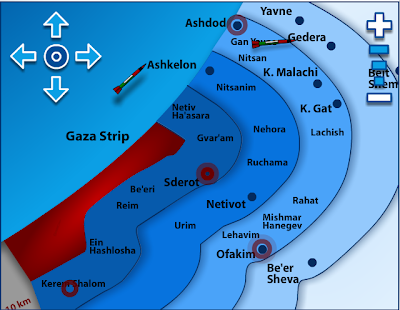 A debate is raging over civilian deaths, some of them children, at a Palestinian school.

Israel’s military said its shelling â€” the deadliest single episode since Israeli ground forces invaded Gaza Saturday â€” was a response to mortar fire from within the school and said Hamas militants were using civilians as cover.

The pictures tug at the heartstrings, as they are designed to do. But there are other pictures of Palestinian children that need to be seen as well.

At A Soldier’s Mother, a marvelous blog I discovered just this week, the mother of an Israeli soldier describes in searing detail the different parenting techniques of Palestinians and Israelis.

I heard a [Palestinian] father mourning the death of his son. He blames the Israeli government, and I blame him. “Are you insane?” I want to ask him. “How could you allow your son to be near mortars being fired? What did you think Israel was going to do?” Why didn’t you take your son?… My son [the Israeli soldier] is stationed far from the cities. Why? Because if he is a target, we don’t want civilians nearby. We do not hide in hospitals, in schools, in homes. Why, why do the Palestinians? And if they do, why, why does the world blame Israel?

Hamas uses children — even their own children — and other civilians as human shields. Palestinian children are indoctrinated from an early age into the perverse death cult of Islamic extremism.

A Soldier’s Mother has many pictures of young Palestinian children playing with toy guns, grenades, suicide belts and more. But check for yourself, scroll to the bottom. Little Green Footballs, which has chronicled what it aptly calls “Palestinian Child Abuse” for years, has a slideshow with over 150 similar photos.

Israel will, and should, continue to do what it can to avoid civilian casualties. The Palestinians, on the other hand, breed their children for martyrdom. This deep-rooted sickness in Palestinian society, which has Islamic extremism as its foundation, is the primary barrier to peace between Israel and the Palestinians. 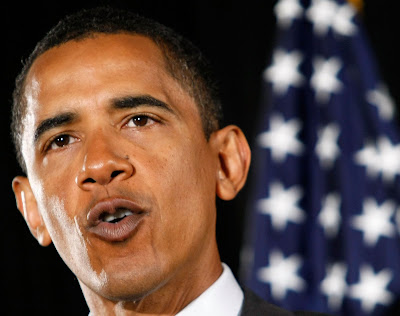 In my very first substantive post on this blog, way back in July 2008, I discussed how Obama was, inevitably, moderating his stance on multiple issues after finally knocking Hillary Clinton out of the race:

But it turns out Obama is a politician. After winning the Democratic nomination by appealing to the young, the idealists, the activists and the pacifists, he’s swerved right so fast that many of his supporters have whiplash.

Now that he’s won the general election, I’ve blogged several times about my relief at the extent to which Obama has not swerved back to the left. But the very signals that I find encouraging are causing consternation in other quarters.

In an essay titled “The Coming Rift,” Abe Greenwald argues at CommentaryMagazine.com that Obama and the Democratic leadership are much more in tune with the Republicans than they are with the liberal Democratic base. Noting the recent support for Israel’s current Gaza offensive from Harry Reid, Nancy Pelosi and other Democrats, Greenwald says:

On matters of foreign policy, social policy, and economics, Democratic leadership is largely indistinguishable from the Republican variety. And Democratic voters have noticed.

The best part of the essay is where Greenwald analyzes the role of Bush Derangement Syndrome (he doesn’t use that term) in creating a disconnect for Democrats:

The runaway train of preposterous (and liberal) expectations that delivered Barack Obama into the White House first gained speed as a runaway train full of preposterous accusations against George W. Bush. With their cartoonish demonization of every Bush policy and associate, groups like the Daily Kos and Moveon.org made it impossible for any liberal with a web browser to give a single conservative policy a fair shake. Barack Obamaâ€™s exploitation and mobilization of this online hysteria made for an unstoppable campaign, but also for an illusory state of political affairs. Democratic politicians, President-elect Obama included, always knew better than the frenzied multitude that voted in â€œchange.â€ But the netroots were duped as a result of their own momentum.

Itâ€™s too early to know how the betrayed will repay their leaders in the next Congressional or Presidential elections, but if Democratic fragmentation is to be avoided down the line, perhaps the introspection about re-branding, redefining, and reaching out needs to happen on the Left.

Democratic activists can be vindictive. In 2000, Joe Lieberman was the party’s VP candidate. Just six years later he was denied his own party’s nomination for re-election to the Senate, and two years after that he became an absolute pariah for daring to campaign for McCain on the basis of support for the Iraq War. The analogy is inexact — Obama clearly is a darling of the liberal Democratic base in a way that Lieberman never was. But that could make the left’s sense of betrayal sting all the more in the context of some future hard decision by President Obama.

Left-wing anger could damage Obama’s effectiveness, but I see happier possibilities for Obama and for our country.

Obama’s election victory was the product of two powerful forces: Obama’s own undeniable charisma, combined with Bush’s liabilities. In turn, Bush’s problems also had two parts: frenzied hatred from the left and dissatisfaction from many across the rest of the political spectrum.

Starting two short weeks from now, Bush will become largely irrelevant. President Obama will be the leader of what Newsweek controversially (but correctly, I think) called a center-right nation. If, as I expect, Obama makes grown-up decisions that infuriate the extreme left, he’ll still have a broad base of support from the center and from some on the right. In the process, Obama — like Clinton before him — may help move the center of gravity of the Democratic party away from the leftist fringe.