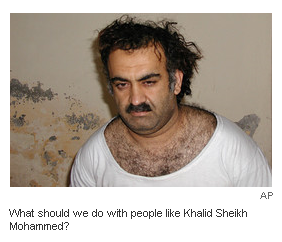 “The single best thing about the election of Obama may be that we now have a chance to view the terror threat without the distorting lens of Bush hatred.”

So says Jack Goldsmith, a former assistant attorney general in the Bush Administration, as quoted in a William McGurn column in today’s WSJ. The topic of the column is Guantanamo, and McGurn describes reports that Obama may tread cautiously despite his campaign promise to close the prison camp and move the remaining 250 detainees.

During the campaign, of course, both John McCain and Barack Obama vowed to close Gitmo down. But a President Obama will likely find it easier to do the prudent thing. As a Republican hawk charged by his opponent with representing a third Bush term, Mr. McCain would have been under immense pressure to prove that he wasn’t George W. Bush. And a hasty closing of Guantanamo would have been a high-profile way to do it.

Fortunately, Mr. Obama is under no such pressure. …

Yes, it’s a double standard. But it could turn out to be a good thing for the nation. What the American people need today is a sensible policy that recognizes three facts: that terrorists present a unique challenge to our rules of war; that capturing and holding terrorists is different from capturing and holding criminals or prisoners of war; and that the men and women who set up Guantanamo did so not because they were out to shred the Constitution but because, faced with some very imperfect choices, this was thought to be the best way to protect the American people.

Six weeks from today, Barack Obama becomes commander-in-chief of the global war against Islamic fascism, as well as the active combat theaters in Iraq and Afghanistan. Obama won the Democratic nomination on a platform of surrender in the Iraqi theater, but events overtook him — it’s now too late to surrender there, as the war in Iraq has largely been won.

By retaining the Secretary of Defense who oversaw the turnaround in Iraq, Obama has signaled that he will take seriously his duty to protect American interests. Caution on Guantanamo is a similar signal. Sometime in 2009, I fully expect Obama to begin explaining why America’s best interests are served by a stable democracy in Iraq — rather than chaos in the wake of a too-hasty withdrawal. And because the explanation will no longer be coming from the hated Bush, both of America’s major political parties will begin to have a stake in the success of the war effort.

That’s why this McCain voter sees yet another silver lining in Obama’s electoral victory. (Wait a minute… silver lining? Are you calling Obama a “dark raincloud”? Don’t even go there.)