Via Taranto (third item) comes the welcome word that some Arab leaders understand the cause of the Gaza conflict better than the Episcopal Presiding Bishop does:

Nimr Hammad, an adviser to [Palestinian Authority President Mahmoud] Abbas, told a Lebanese paper, “The one responsible for the massacres is Hamas, and not the Zionist entity, which in its own view reacted to the firing of Palestinian missiles. Hamas needs to stop treating the blood of Palestinians lightly. They should not give the Israelis a pretext.” Hammad also urged Hamas to cease “operations which reflect recklessness, such as the firing of missiles.”

The quote isn’t exactly cheerleading for the “Zionist entity,” and Taranto points out that the PA and Hamas are rivals for Palestinian leadership. Still, it’s the most pro-Israel statement I can ever remember seeing from a Palestinian leader in the context of hostilities. Egyptian President Hosni Mubarak also is said to be “very angry with Hamas.” 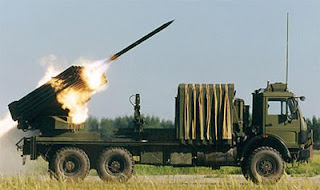 Wired magazine’s Danger Room defense blog is covering the Gaza conflict — today comes the grim news that Hamas has obtained Chinese rockets with a range of 22 miles, doubling the terrorists’ reach into Israel. The rockets are also deadlier and more accurate (not that Hamas is concerned about precision targeting). Thanks for nothing, China… (Photo: Defense Update via Wired)

For six decades, the United Nations Relief & Works Agency (UNRWA) has been devoted exclusively to Palestinian refugees. (Surely there must be a UN agency devoted to the well-being of Israelis, right? Hello?) UNWRA said today that of the people killed in the ongoing Israeli offensive against Hamas targets in the Gaza Strip, at least 25% have been civilians.

The agency appears to mean this as a criticism of Israel. Personally I think it reflects well on Israel’s targeting ability if civilian casualties are so low, given the jihadists’ standard tactic of mingling terrorist personnel and infrastructure civilian population centers.

* * *
Katharine Jefferts Schori is the Presiding Bishop of the Episcopal Church, and as an active Episcopalian I deeply respect her. So it pains me to see her focusing blame on Israel in the current conflict.

After a perfunctory call for an end to the Palestinian rocket attacks, she unleashes her passion to make clear where her sympathies lie:

“Innocent lives are being lost throughout the land we all call Holy, and as Christians remember the coming of the Prince of Peace, we ache for the absence of peace in the land of his birth,” Jefferts Schori said in her December 29 statement. “Immediate attention should focus on vital humanitarian assistance to the suffocating people of Gaza.”

Sorry, PB, but I believe your sympathies are misplaced. Somebody (apparently not de Tocqueville) said that in a democracy, the people get the government they deserve. The Palestinians, having been handed a democracy, elected a terrorist group to lead their government.

On either side, the deaths of children and noncombatants are tragic — but we can never lose sight of the fact that Israel tries to minimize civilian casualties, while Hamas tries to maximize them.

Time to smack the auto industry and the UAW again. From a column in yesterday’s Wall Street Journal:

The collective bargaining agreement with the UAW is a heavily negotiated document the size of a small telephone book. It is virtually identical for each of the Detroit Three, owing to “pattern” bargaining, but it doesn’t exist at all in their U.S. competition, the nonunionized transplants. Not only work rules, but fundamental business decisions to sell, close or spin-off plants are forbidden without permission. That permission may come, but only at a price, since everything that affects the workplace must be negotiated. …

In an environment of downsizing, the problem is exacerbated, as the entrenched bargaining structure causes innumerable inefficiencies. Typically each plant or warehouse is a “bargaining unit” and has a union president, who has a staff. If the company consolidates facilities, there will be no need for two presidents and two staffs. Since neither president wants to play musical chairs, they will both point to the bargaining agreement and resist consolidation. As a result, unnecessary facilities are not sold, but kept open, lit and heated, just to preserve a redundant bargaining-unit president and his team.

Fortunately, the government has a solution: On top of the $17.4 billion in loans already pledged to keep GM and Chrysler out of their rightful place in bankruptcy court, let’s invest $6 billion of taxpayer money in auto finance company GMAC. That way, customers who are less credit-worthy can “afford” vehicles that are overpriced to sustain entrenched unions.

Over to you, Mr. Obama, and good luck.