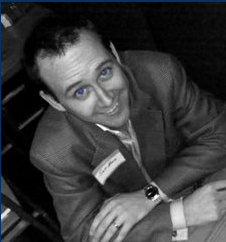 (Saturday morning update at the bottom.)

Whatever Ford is paying Scott Monty, they oughta pay him more. He’s been Tweeting all day.

Earlier today I described how Scott, the head of social media for Ford Motor Company, had his feet held to the fire by a recently formed virtual organization called Top Conservatives on Twitter. His day actually started well before the exchange I posted then. Around 9 a.m. he started trying to correct the “Big 3 Bailout” meme by pointing out that Ford, comparatively healthy, was not included in the failed bailout legislation. A Tweeter named 64 had quipped, “Can’t believe Daily News missed chance to run DC TO FORD: DROP DEAD this morning.” Scott replied, “@64 Ford wasn’t part of the proposed bill. See http://tinyurl.com/6hms95”. Then he was off to the races, and well into the evening he’s still Tweeting — he’s posted more than 140 Tweets today, all while serving as the public face of Ford Motor Company in the Tweetstream.

Some of the conversations might try the patience of a lesser man. Here he explains and defends his practice for handling “DMs” — direct messages, which unlike normal Tweets are private communications between two Tweeple: 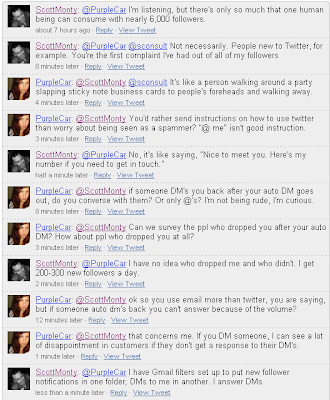 Scott (I call him Scott ’cause he’s my BFF, we follow each other on Twitter) has attracted a lot of attention for his pioneering efforts in representing Ford in the world of social media. Just the other day, blogger Noah Mallin at Reprise Media described how Scott defused a mini-controversy:

Ford today sent fansite TheRangerStation.com (dedicated to lovers of their small pick-up trucks) a lawyerâ€™s letter over copyright violations. This sent the dozens of other Ford fan sites, many of which use Ford branded names, into a tizzy over fears that they too would be asked to stop using Ford names in their URLâ€™s and site materials. By the time the story surfaced on major car blogs like Jalopnik and Autoblog the story had been boiled down to Fordâ€™s lawyers asking for $5,000 or the site gets shut down.

It sounds like a clueless corporation alienating its fans, but the reality is more complicated. It turns out the site was offering counterfeit Ford paraphernalia for sale, and that (not the URL) was the reason for the lawyer letter. Scott sent the site owner a polite message of explanation, which is now proudly posted on the site’s forum.

If you’re still craving more information about my BFF Scott Monty, here’s a recent post on his personal blog about his work, which he likens to “fighting a forest fire with a squirt gun.”

Meanwhile, TCOT is gearing up for Operation Ford Motor, along with other Action Projects. Watch this space for more updates in the days ahead.

Update (Saturday, noonish): I notified Scott by DM when I posted the above last night, and joked that I’m trying to get him a raise. He has given me permission to print his DM back to me:

ScottMonty Thanks. But no raises in 2009. Search for “merit pay” on http://media.ford.com/article_download.cfm?article_id=29265

He points out that the announcement of no merit pay in the release he links is from Nov. 7, before there was any widespread discussion of an auto bailout.

In re-reading this and my other post from yesterday, I don’t think think I’ve made it clear enough why Scott Monty’s efforts are such a big deal. I spent nearly 20 years working in PR/communications for huge companies, either as an employee or a consultant. Huge companies are risk-averse by nature, and communications pros at big companies tend to be even MORE risk-averse — having had their heads handed to them multiple times for small or imaginary gaffes.

Scott is a breath of fresh air — and a braver man than I. After I posted last night saying he had Tweeted 140 times that day, he came back on with 20 more Tweets after midnight, and he’s made another 50 this (Saturday) morning. Virtually all of his messages are in response to individuals, some of whom are unfriendly — but what he says is out there for anyone to see. I’m amazed not so much by the sheer volume as by the fact that he clearly has a corporate mandate to fly solo. More than 200 Tweets in the last 28 hours — ain’t no way he’s running them by the Legal department, Government Relations, two EVPs, etc.

Welcome, Twitterers, Diggers, Cornerites, readers from Social Media Today, Dalton’s Briefs, Northwest Indiana Politics, Kicking Over My Traces and others. If you enjoy this post, I hope you’ll take a look around the site. In addition to the auto bailout, I post a lot about the adventures of a red voter in a blue state, and on Iraq, the financial crisis, capitalism and more. Original post follows, more updates at the bottom.

I don’t know what if anything will come of this, but it’s fascinating — beginning at about 10:30 a.m. today, Scott Monty, the head of social media for Ford (yes, there is such a function now), began a Twitter conversation with Michael P. Leahy, head of a new Twitter-powered conservative group called Top Conservatives on Twitter (#TCOT). 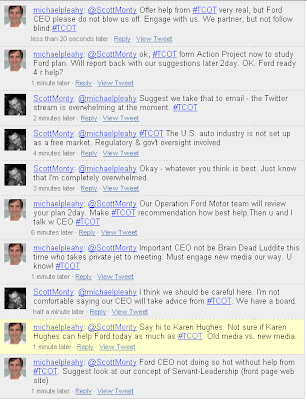 Leahy has appointed a #TCOT Project Servant-Leader (defined here) to review what Monty described as Ford’s “well thought-out plan” for the future of Ford in the American auto industry. Since all of this is happening in Internet time, Leahy promises to finish the review today, and report back, “then u and i talk with CEO.” Monty says he can’t promise the CEO will take advice from #TCOT — “We have a board.”

As I said, I’m not sure anything will come of it, but I’ll report back when I know more. For now it looks like the bailout is dead in Congress, but the Bush administration is looking at repurposing some of the $700 billion financial bailout for the auto industry.

Update: Operation Ford Motor now has its own hash tag, #OFM, if you want to follow the action today.

1:50 pm – The Corner post was the traffic champ until a few minutes ago, sending about five readers per minute. Now all of a sudden Digg has taken control. Scott Monty, good sport that he is, asked his followers to Diggit.

Over at change.gov, the President-elect’s transition website, the incoming administration is continuing its efforts to tap the power of social media. Yesterday this took the form of an “Open for Questions” tool that encouraged readers to submit questions and issues they believe the new president should address.

Participation in Open for Questions outpaced our expectations, and we’re looking forward to rolling it out again next week. We’re tremendously excited about the promise of tools like this that offer Americans a level of access that has historically been hard to come by. By voting questions up, users have been able to convey to our team which major issues — like the auto industry, health care, ethical standards, and others — are the most important to this community.

Yes, those are certainly weighty and important issues. I might throw in Iraq, Afghanistan, national security, etc., but that’s just me. So… which of these subjects received the most votes as the most pressing issue facing the nation?

“Will you consider legalizing marijuana so that the government can regulate it, tax it, put age limits on it, and create millions of new jobs and create a billion dollar industry right here in the U.S.?”

Nicely phrased as an economic imperative, and the libertarian in me favors legalization, although my personal interest in this issue has long since passed. But I’m picturing a scene in college dorm rooms across the country, a smoky bong next to the laptop, as America’s newest voters engage in political discourse to shape the nation’s agenda: “Dude! Now you log in and vote!”