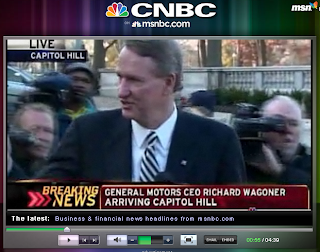 Here’s why Congress ought to hold the line and refuse to bail out the automakers (emphasis added):

Requiring car companies to meet corporate average fuel economy (CAFE) standards forces them to lose money on small cars that people don’t want so they can sell big cars that people do want, at least until gas prices soar out of sight. Proof positive came last month, when the Toyota Sequoia and Honda Pilot SUVs posted big gains while sales of most other cars plunged. The obvious reason: gasoline prices plunged too.

The reason Europe has fuel-efficient cars is high gas prices, not CAFE laws. What’s more, the only times that Americans have switched to smaller cars is 1973, 1979 and the spring of 2008, when gas prices here were high. So the time has come for Congress to stop pretending that fuel-economy can be legislated and to put market forces to work. That means raising gasoline taxes — offset by cuts in income taxes and by gas vouchers for needy people. These measures would succeed at raising fuel economy and in reducing automotive emissions where the CAFE law has failed.

What do the CAFE standards have to do with the bailout? In the Rube Goldberg link above. Holman Jenkins describes how the CAFE standards help entrench the unions. Refusing to bail out the automakers would address the union issue from the other direction — by giving automakers the ability to renegotiate existing labor (and dealer) contracts in bankruptcy court.

There is reason to hope that Congress may do the right thing — because they’re hearing from their constituents (emphasis added):

Congressional leaders are concerned that public opinion has turned strongly against help for the automakers. A CNN/Opinion Research Corp. poll of nearly 1,100 Americans conducted earlier this week found 61% oppose a bailout, while only 36% support it. Even in the Midwest, home to most of the automakers’ remaining plants, 53% of those polled opposed federal help.

That was a stunning reversal of polls taken before the CEOs last trip to Capitol Hill. A poll Nov. 11 and 12 conducted by Peter D. Hart Research Associates found 55% supported federal assistance for automakers at that time, and only 30% who believed they should not get federal help.

On the last trip to DC, of course, the auto executives caught a lot of heat for arriving on their separate corporate jets, and presumably that symbolism is fueling the shift in public opinion. (This time, they arrived in hybrid cars and vehicles.) The cost of the corporate jets are a round-off error compared to the automakers’ overall expenses. But populist indignation may help Congress do the right thing on the bailout, because they can be seen as “punishing” the executives as well as the unions.