(Welcome, Corner readers, and thanks to Cornerite Iain Murray for his continuing support. Thanks also to Mickey Kaus for linking, with a permalink no less — sorry about the crack below about the Kausfiles template!) 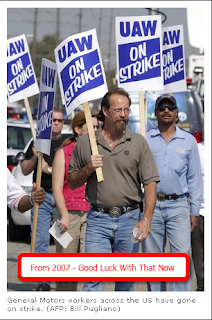 In an article on Slate, Mickey Kaus explains why the Detroit automakers are in trouble:

There are some obvious culprits: shortsighted American managers, schlocky designers, an insular corporate culture. Here’s another: the very structure of Wagner Act unionism. The problem isn’t so much wages as work rules–internal strictures that make it hard for unionized competitors to constantly adapt and change production processes the way the Japanese do.Now that everyone is criticizing work rules, it’s easy to forget that they don’t represent a perversion of the collective bargaining process–they are the intended result of that process, and were once celebrated as such.

Kaus doesn’t explicitly advocate or oppose bankruptcy in the article. From what I’ve reviewed of his earlier writing, he doesn’t seem to have taken a position one way or another — rather, he has repeatedly pointed out the problems and the flaws with both bankruptcy and a bailout. (That link is to his blog homepage — his archaic “Kausfiles” template has very few permalinks, so you have to just keep scrolling or searching except when he puts up a major article.)

But to me, his current article explains vividly why bankruptcy is the only solution for Detroit. He quotes from another writer’s 1983 article:

Under the Wagner Act, management manages. What the union does is complain, and negotiate for a rule limiting management’s right to do what the union doesn’t like. A worker protests that his job should be classified as “drilling special and heavy” instead of “drilling general.” The parties butt heads, a decision is reached, and a new rule is deposited like another layer of sediment. At some GM plants, distinct job categories evolved for each spot on the assembly line (e.g., “headlining installer”). In Japanese auto plants, where they spend their time building cars instead of creating job categories, there is only one nonsupervisory job classification: “production.”

Note that the above was written 25 years ago — the problem already was clear, and now the “layers of sediment” have had another quarter-century to accumulate. Kaus continues, describing the situation today:

Yes, faced with successful Japanese rivals, Detroit and its union have been trying to reduce the number of work rules–but the process has been slow, like pulling teeth, especially because the UAW defers to its locals.

Confessions of a Union Man

I’ve been professionally aligned with “management” for the past quarter century, but before that I briefly was an unpaid, elected union official. (It was the Newspaper Guild, an anemic junior varsity union in a dying industry, but still. I was the head of a roughly 40-person unit at The Home News, a small New Jersey daily. It’s now Home News Tribune Courier News, and the Guild unit didn’t survive the mergers.)

My point, and I do have one, is that I’ve seen enough of the behavior of highly paid top union officials to understand that their focus is not on the best interests of their members. Their focus is on protecting their lucrative jobs, and the only way they know to do that is to be perceived by the members as being willing to fight to the bitter end to protect existing contracts.

But in bankruptcy court, the contracts (theoretically, at least) can be voided. And that’s the level of change that will be required to put the U.S. auto industry on solid competitive footing with foreign automakers.

A Shout-Out to #TCOT

In the past few days, my humble blog has had a welcome flurry of attention because of a post I wrote describing the interaction between Ford’s head of social media, Scott Monty, and a new virtual organization called Top Conservatives on Twitter (TCOT). (What is Twitter, you ask? Here is a primer.) Having voted for Clinton twice I’m still not used to thinking of myself as a conservative, but I’m currently the 655th top conservative on Twitter, according to the group’s list.

I’ve been moving up the ranks as more people sign on to follow my “Tweets” because of the publicity. [Are YOU following me on Twitter?] The original post got linked to from The Corner, sending hundreds of visitors my way and spawning other threads in the conservative blogosphere. I later did a followup post expressing admiration for Monty’s grace under pressure.

My BFF Scott Monty is working hard to get the public to understand that the auto bailout defeated last week in Congress was not a “Big 3” bailout. As I said in an earlier post,

Monty argues, convincingly to my mind, that under CEO Alan Mulally — a former Boeing exec who never worked for a car company before two years ago — Ford has gone much further than GM and Chrysler toward adjusting its business model to the emerging realities. TCOT is racing to try to reinforce that story — dozens of volunteers (including, to some degree, me) have mobilized over the weekend for Operation Ford Motor, an effort to help differentiate Ford from the others, while striking a blow for capitalism and the principles of market discipline.

The proposed purpose of Operation Ford Motor is based on the following concepts:

– To provide input to Ford Motor Company on why it is important to remain free-market focused, and not accept government loans.

– Partner with Ford in making its example of a market-based approach the standard for American business without relying on taxpayer dollars.

– Lay the groundwork for a market-based approach to turning around the auto industry, and the economy at large.

This nascent potential partnership is fragile on both sides. Monty has been unfailingly polite, but has cautioned that he can make no commitment on behalf of Ford. He also pointed out, in comments on a blog I just can’t find right now, that the company cannot become too closely aligned with any particular ideology. And TCOT may well bail out of this project if members come to disapprove of Ford’s actions.

I admire Monty and hope he and his company are successful in telling The Ford Story and differentiating Ford from the Big Other Two. Ford has already won some concessions from the UAW, and has refocused its business and avoided a cash crunch — it’s by far the healthiest of the three. But let’s say Chrysler and GM go bankrupt and shrink dramatically, while Ford avoids bankruptcy. Ford could end up at a competitive disadvantage because the other companies are able to put more pressure on the union.

As I said at the beginning of this adventure, way back on Friday morning: “I don’t know what if anything will come of this, but it’s fascinating.”