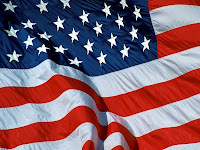 Conservative Peggy Noonan takes a step back from the gloomy economy and focuses on the big picture:

People are angry but don’t have a plan, and they’ll give the incoming president unprecedented latitude and sympathy, cheering him on. I told a friend it feels like a necessary patriotic act to be supportive of him, and she said, “Oh hell, it’s a necessary selfish actâ€”I want him to do well so I survive. We all do!”

This is a good time to remember who we are, or rather just a few small facts of who we are. We are the largest and most technologically powerful economy in the world, the leading industrial power of the world, and the wealthiest nation in the world. “There’s a lot of ruin in a nation,” said Adam Smith. There’s a lot of ruin in a great economy, too. We are the oldest continuing democracy in the world, operating, since March 4, 1789, under a vibrant and enduring constitution that was formed by geniuses and is revered, still, coast to coast. We don’t make refugees, we admit them. When the rich of the world get sick, they come here to be treated, and when their children come of age, they send them here to our universities. We have a supple political system open to reform, and a wildly diverse culture that has moments of stress but plenty of give.

The point is not to say rah-rah, paint our faces blue and bray “We’re No. 1.” The point is that while terrible challenges face usâ€”improving a sick public education system, ending the easy-money culture, rebuilding the economyâ€”we are building from an extraordinary, brilliant and enduring base.

In the second presidential debate, on October 7, it was already becoming clear that my candidate was going to be defeated. The next day I wrote, “I’m starting to get used to the idea of President Obama.” But while McCain was outmatched in that debate, he gave me one moment of inspiration:

I’ve heard a lot of criticism about America, and our national security policy, and all that, and much of that criticism is justified. But the fact is, America is the greatest force for good in the history of the world.

Yes. My preferred formulation has always been, “America is the greatest force for good in the world this side of the Almighty.” But McCain has a bigger soapbox and a far more noble resume — I’ll sign on to his version.

I mean no disrespect for any other country. About 9% of my readers come from outside the United States, according to the flag-bedecked widget in the right column. Just this morning I logged my first visitor (since installing the widget) from Slovenia — DobrodoÅ¡el! (That supposedly means “welcome!” in Slovenian.)

Other cultures are worthy of respect, and great people can emerge from any nation. But some people will always face greater challenges because of where they live. Those of us who have been born as American citizens need to remember from time to time that we hit the citizenship lottery.