(After learning more about Madoff’s victims, I recanted in a later post — KP)

Apparently regulators ignored warning signs for more than a decade while Bernie Madoff stole and/or lost as much as $50 billion of his clients’ money. Holman Jenkins explains why we should not waste our sympathy on the clients:

There are costs and benefits to everything, including the cumbersome apparatus of firms that subject themselves to intrusive monitoring and conform to standards of transparency. Mr. Madoff’s clients chose to avoid those costs. For that matter, they chose to forgo lower but safer returns, as many rich people do, by entrusting their fortunes to T-bills.

The herding automatons of the media can never encounter lawbreaking in the financial markets without concluding that it demonstrates the necessity of more laws against lawbreaking. Congress, now in the process of convincing itself it should run the auto industry, no doubt will see in Mr. Madoff proof that Congress is needed to manage rich people’s money and ordinary people’s too. Then we’ll all be in the same position as Mr. Madoff’s clients.

I’ve never been burdened by great wealth. Hedge funds like those that invested with Mr. Madoff typically require $1 million or more to open an account — no danger for me! As a 50-year-old “thousandaire,” I probably don’t have to worry about what I would do with a million dollars in investable assets.

But it’s at least theoretically possible that I could strike it rich — by starting a successful business, say, or writing a bestselling book. If so, I’ll have to have quite a few “safe millions” in investments no riskier than an S&P 500 index fund before I’ll even think of risking a million dollars with a hedge fund.

Most of the investors who lost millions have other millions to fall back on. Somewhere there may be an investor who invested his only millions with a fund victimized by Mr. Madoff. If so… well… bummer. But no tears here. 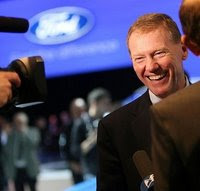 To be precise, Mulally was Tweeting by proxy yesterday, via Scott Monty. It only lasted a few minutes, but it’s still fairly cool. No great revelations on weighty policy matters, but I learned that Mulally makes a point of driving a different auto every day, including competitor models, to stay close to the public experience of driving. Not earthshaking, but humanizing.

It’s notable that Mulally, a former Boeing exec, first started working for an auto company only two years ago. As I’ve written in previous posts, Ford is seeking to differentiate itself from the Big Other Two. It’s working for me.