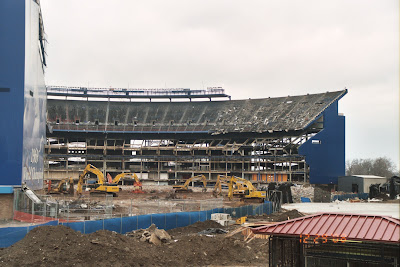 My friend Dennis was wandering with his camera one day in late December and snapped this photo of Shea Stadium, in the process of being disassembled.

Gone already is the outfield fence, over which Kevin McReynolds hit a homer in the 14th inning to beat the Expos in August 1989. It was by far the most exciting game I’ve ever attended. Fabulous defensive play ended several scoring opportunities in extra innings, and a newspaper account the next day said that if it had been played in post-season, it might be considered one of the greatest games in baseball history. It was perfect baseball weather, and a friend and I had paid a scalper a surprisingly modest sum for field-level corporate seats, which ended up being in the second row along the left field line.

Construction of Citi Field continues next door. By all accounts the new stadium will be a huge upgrade, even if it is named after a struggling banking behemoth. But Kevin McReynolds will hit no homers there.

The Mets already have reconstructed their bullpen, and hope to put the finishing touches on their starting rotation soon. It’s only 39 days until pitchers and catchers report to spring training, and the Mets will begin the season tied for first place, playing on a green field under the open sky.