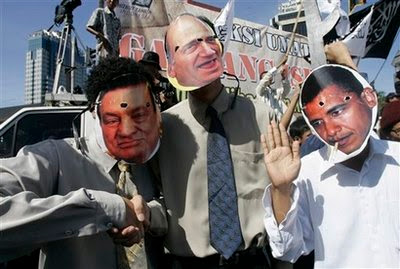 I didn’t vote for Obama, but I wish him well, because there’s a lot at stake. Sixteen days from now he’ll be America’s president, and my president.

So I don’t want to slip into the kind of partisan glee some conservative bloggers have been showing at the growing evidence that the man behind change.gov (I bet they retire that domain before 2012) will face some limitations in his ability to change the world.

There’s little doubt that Obama will be treated with considerably more respect throughout his term by the American news media than Bush ever was. That’s likely to be true around the world as well, at least initially. But America has real enemies, and Obama will quickly become the face of the Great Satan for jihadists everywhere. The process is under way.

Based on what I’ve seen so far, I am more confident than I was two months ago that Obama will protect America with a muscular foreign policy. It will be interesting to see how the longtime purveyors of Bush Derangement Syndrome will react when it’s their man making the tough decisions.

One thought on “Gaza, and Obama Derangement Syndrome”