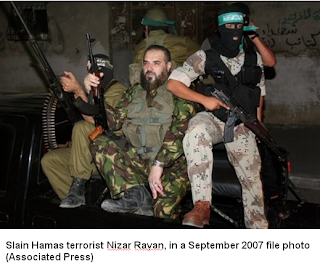 My satisfaction at the news yesterday that Israel had taken out a top Hamas leader was tempered somewhat by the fact that his family died with him — today’s stories put the toll at four of his wives and 10 of his children. On the face of it, that sounds like a lot of “collateral damage,” no matter how important the primary target.

But you’ll hear no criticism of Israel from me over this incident. Not only did Nizar Rayan consciously use his family as human shields, they also refused to leave the house even after Israel warned them that it would be destroyed.

Still, as a parent, it pains me to think of a small child being killed because the grown-ups can’t get along. However, small children grow up — and even before yesterday, Rayan already sacrificed one of his sons to “martyrdom”:

Rayan, 49, ranked among Hamas’ top five decision-makers. A professor of Islamic law, he was known for his close ties to the group’s military wing and was respected in Gaza for donning combat fatigues and personally participating in clashes against Israeli forces. He sent one of his sons on an October 2001 suicide mission that killed two Israeli settlers in Gaza.

Israel’s military said the homes of Hamas leaders are being used to store missiles and other weapons, and the hit on Rayan’s house triggered secondary explosions from the stockpile there.

Israeli defense officials said the military had called Rayan’s home and fired a warning missile before destroying the building. That was impossible to confirm. The officials spoke on condition of anonymity because they were not authorized to discuss military tactics.

Meanwhile, Hamas itself has admitted that Rayan was the person who pioneered the human shield concept that claimed his family. From the valuable website of the Israeli Consulate in New York:

Hamas has released an official statement declaring that Dr. Nizar al-Rayyan who was killed in a pinpointed attack earlier today is the father of the â€œHuman Shieldsâ€ method:

â€œIt was Dr. Rayyan, who took the initiative, two years ago, to protect homes against Israeli occupation air strikes by forming human shields which succeeded in stopping this practice by the Israeli occupation, where they used to phone the occupier of the home and warn him to evacuate it in ten minutes because the home is going to be bombed.â€
[bold not in source]

I’m sorry the children were killed. But Rayan killed them. I stand with Israel.