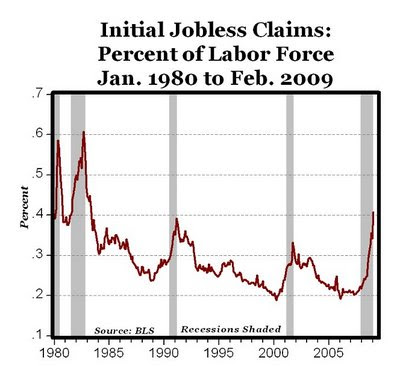 After repeatedly invoking the specter of the Great Depression to frighten the public into supporting the “stimulus” bill, the Obama administration has moderated its rhetoric. Professor Mark J. Perry of the University of Michigan offers statistics to show just how inappropriate it is to even talk about comparisons with the Depression:

Although we’re nowhere near a depression, the current recession probably has not hit bottom. In an interview televised yesterday, Fed Chairman Ben Bernanke said unemployment is likely to get worse before it gets better, but that he expects the recession to end “probably this year.”