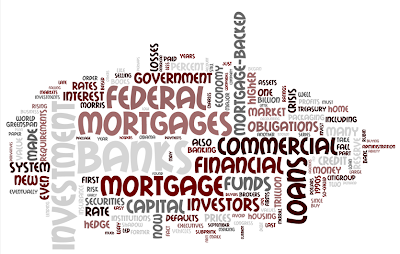 A straightforward guide to the financial mess.

I missed it when it first came out, but the New York Review of Books last month published one of the best comprehensive explanations I’ve seen of the causes of the current economic unpleasantness. Weighing in at just over 5,000 words, it’s not a quick read — but it covers a lot of territory, as indicated by its word cloud, above, from wordle.net.

The essay, which doubles as a review of three recent books about the crisis, does a skillful job of explaining the interaction of a wide variety of factors, including securitization of mortgages, the housing bubble, the growth of unregulated hedge funds, rating agency conflicts of interest, subprime mortgages and more.

But enough praise, it’s time to find fault. Author Jeff Madrick starts and ends his essay by contending that the primary force behind the crisis is corporate greed, not government policy. It’s a defensible position, and certainly the titans of Wall Street have a lot to answer for. But governmental enabling and social engineering played a big role too, and Madrick seems to be working way too hard to let the politicians off the hook:

It was principally the investor appetite for the mortgage-based securities and the easy profits made by the banks and mortgage brokers that led to the mortgage-writing frenzy in the 2000s, not encouragement by the federal government to lend to low-income home buyers.

He neglects to mention what form this “encouragement” took — fines and other penalties against banks that did not issue “enough” mortgages to borrowers from disadvantaged groups. With the government telling them to write mortgages or else, and with a securitization system that distributed risk so widely that no institution had a meaningful stake in the performance of any individual loan, and with the widespread belief that refinancing would be possible because housing prices only go up… it’s no wonder that the ranks of home “owners” swelled well beyond the pool of people who could actually afford to own a home.

If solutions are to be found, the nation requires robust and pragmatic use of government, free of laissez-faire cant and undue influence from the vested interests that have irresponsibly controlled the economy for too long.

At least he acknowledges that clumsy market intervention can sometimes make the problem worse:

Another necessary component for reviving the credit system involves the self-destructive accounting rules and loan covenants that are making the crisis worse than it need be. The losses required to be taken under mark-to-market accounting, and the consequent reduction in capital, reinforce the fall in asset values. Similarly, current ratings requirements force the financial institution to sell investments to raise capital.

Summing up, Madrick says “This is, as many economists now concur, the worst economic crisis since the Great Depression.” Well, no. It’s possible that things will get worse from here, but for now all you can really say is that it’s the worst recession since 1982.