Let’s drive the Dow down 680 points on this shocking news!

It turns out that the commonly understood definition of a recession — two consecutive quarters of declining gross domestic product — isn’t the definition used by by the recession-calling National Bureau of Economic Research. Those worthies also consider the labor market, real personal income, industrial production, the entrails of a freshly sacrificed goat, and wholesale and retail sales. GDP has been erratic and we have not yet seen two consecutive quarters of contraction.

Here’s my best PR-guy attempt to put a positive spin on this: The NBER has backdated the start of the recession to December 2007, so the recession already has been under way for 11 months. That means it’s already tied for the third-longest recession since World War II — only the recessions in 1973-75 and 1981-82 have been longer, at 16 months each. So unless this recession is going to set a post-war record, it has no more than 5 more months to go.

That seemed like a positive spin when I thought of it, but typing it has bummed me out. I was kidding about the goat. 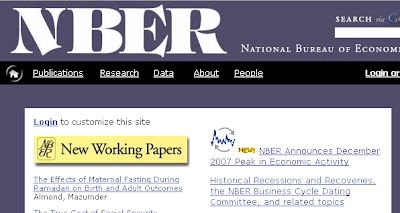 NBER makes the call. I especially like the cheery yellow “NEW!” logo in the right column.