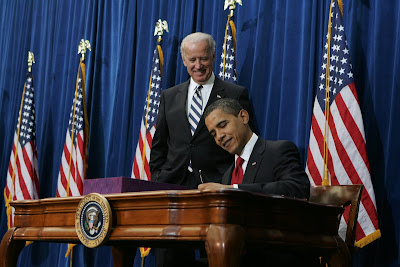 No worries — Sasha and Malia’s kids will pay for it

The bill was written in monopartisan secrecy, weighed down by irrelevant spending, considered in a rushed, uninformed debate and passed on a virtually party-line vote. The law contains provisions that seem to weaken welfare reform and invite trade disputes. And it adds a massive burden of debt to existing massive entitlement obligations requiring massive borrowing from international sources — or, if such credit dries up, the massive printing of money to buy these bonds, leading to inflation.

But while the legislation was deeply flawed, there was little alternative to action. The usual recession remedy — the lowering of interest rates by the Federal Reserve to loosen up credit and spending — is of little use when the credit system itself is broken and rates are already near zero. The president and Congress were left with one option: attempting a fiscal jolt to counter the economic cycle. Such efforts in the past have often been mistimed, with the cavalry arriving just after the settlers have been massacred. But one has to try. In this case, necessity was the mother of excess.

For political reasons, I suppose it’s true that “one has to try.” But one does wish that one could be more confident about the outcome while saddling one’s grandchildren with debt.

After weeks of invoking the Great Depression, Obama performed what Politico referred to as a “rhetorical pirouette” while signing the bill:

In his remarks, Obama projected an air of confidence. â€œWe will leave the struggling economy behind us and come out more prosperous,â€ he vowed.

Well, one hopes he’s right. But since Obama brought up the Depression, let’s take a look at what has been learned from the historical record:

The recession that began in 2008 could turn out to be the worst slowdown since the Great Depression of the 1930â€™s. For three-quarters of a century, economists have been studying it diligently. And even now they cannot come to a definitive conclusion about the cause of that depression, the reasons for its severity and duration, or what cured it. In an introduction to a book of essays on the Great Depression he compiled in 2000, Ben S. Bernanke, then a Princeton professor and now chairman of the Federal Reserve Board, wrote, â€œFinding an explanation for the worldwide economic collapse of the 1930â€™s remains a fascinating intellectual challenge.â€

Today, of course, the challenge is more than intellectual.

My wife has threatened to stop reading my blog because it’s so depressing, so I’ve just spent 20 minutes staring at the screen, trying to think of a positive way to end this post. Here’s the best I can muster: I still think comparisons with the Great Depression are overwrought. But even after that dark period, America did “leave the struggling economy behind us and come out more prosperous.” I have no doubt we will do so again, eventually.

Sweetie, I’ll let you know when I’ve changed the subject.