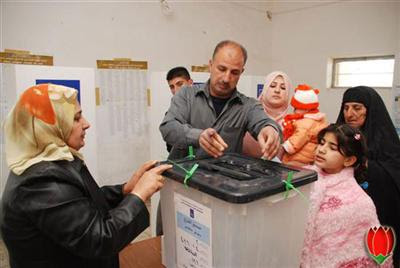 What if they held an election and the terrorists stayed home? From MSNBC:

BAGHDAD – Iraqis held their most peaceful election since the fall of Saddam Hussein on Saturday, and voting for provincial councils ended without a single major attack reported anywhere in the country.

In the NBC Nightly News report of the elections, below, we see how women are beginning to play a more prominent role in Iraqi government and society.

Visit msnbc.com for Breaking News, World News, and News about the Economy

Our new president also opposed the surge, of course, and he won his party’s nomination in part because he alone among the major candidates opposed the war in Iraq from the start. I’m very grateful that he was not the commander in chief in 2007, when the new strategy was put in place. Now that it’s Mr. Obama’s war, I’m heartened by the fact that he kept in place the Defense Secretary who oversaw the change in strategy.

“I congratulate the people of Iraq on holding significant provincial elections today,” Mr Obama said in a statement. “This important step forward should continue the process of Iraqis taking responsibility for their future.” Thanks to President Bush, they have the opportunity to do so.

(Photo at top is from PUK Media, where there are dozens more photos from the voting.)