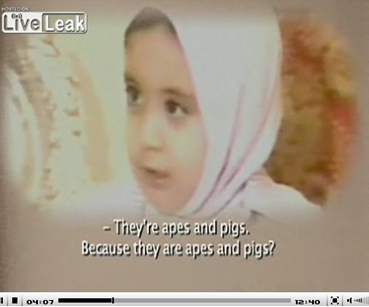 Basmallah, 3 1/2, shares what she has been taught about Jews,
in the short film Fitna

Last week, Great Britain shamefully denied entry to Geert Wilders, an elected member of the Dutch parliament, who had been invited to a screening of his film Fitna in front of the British House of Lords. It reportedly was the first time that Britain had denied entry to a duly elected legislator from a fellow European Union country.

Why did Britain take this drastic action?

The meeting of Mr. Wilders and members of the British Parliament had originally been planned for 29 January, but was postponed. Lord Nazir Ahmed, a Muslim member of the House of Lords (Labour), had threatened to mobilize 10,000 Muslims to prevent Mr. Wilders from entering the British Parliament. Lord Ahmed boasted in the Pakistani press that the cancellation of Mr. Wildersâ€™ visit was â€œa victory for the Muslim community.â€

More precisely, it was a victory for Islamic extremism, which once again successfully uses the threat of violence to push around a major Western power.

I highly recommend watching Fitna, which is available online in English translation — although be warned that it contains gruesome images, many of which you have seen before. As described by National Review contributor (and former federal prosecutor) Andrew C. McCarthy:

Fitna runs about 15 minutes long. It depicts a phenomenon familiar to Britons who witnessed July 7 and Americans who lived through September 11: The faithful rendition of verses from the Koran, often recited by influential Islamic clerics, followed by acts of terrorism committed by Muslim militants who profess that they are simply putting those scriptures into action. To be sure, this is not the dominant interpretation among the worldâ€™s billion-plus Muslims, most of whom do not so much interpret their creed as ignore those parts that would otherwise trouble them. But to deny that Fitna reflects an intellectually consistent construction of Islam, adhered to by an energetic minority, is to deny reality.

Wilders leaves no doubt that he believes Islam itself is the problem, not just a small band of fanatics who have tried, as a recent president was known to say, to “hijack one of the world’s great religions.” Wilders ends the film with these words crawling up the screen:

For it is not up to me, but to Muslims themselves to tear out the hateful verses from the Quran.

The Government insists that you respect Islam, but Islam has no respect for you.

Islam wants to rule, submit, and seeks to destroy our western civilization.

Now, the Islamic ideology has to be defeated.

Strong stuff, but as John O’Sullivan writes in the New York Post:

You may object that “Fitna” is one-sided or the Koranic quotations are wrenched from their context. If such criticisms have merit, surely the correct response is to debate with Wilders, not ban him.

Wilders is by no means above reproach, and he does the cause of free expression a disservice by calling for the Quran to be banned in the Netherlands. But his pending prosecution, under a hate-crimes law in the Netherlands that could send him to prison for up to two years, is an abomination in a nation that nominally values civil liberties.

Fitna is, in fact, filled with hate speech, and you’ll have no trouble spotting it in the film. It comes from the pages of the Quran and from the mouths of the Muslim extremists. There is plenty of room to argue that Wilders’ message is distasteful or overwrought, and Muslims and non-Muslims alike deserve every opportunity to make those arguments — peacefully. By prosecuting Wilders and declaring him persona non grata, the Netherlands and Britain are proving once again what Western nations have been demonstrating for years: terrorism works.