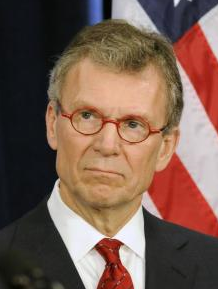 Tom Daschle withdrew as nominee for Secretary of Health and Human Services yesterday, reportedly to enable him to audition for a better-paying movie gig as Harry Potter’s dad.

Obama officials had sought a seamless transition, nominating most of his Cabinet at record pace and taking office ready to implement a raft of new policies. His reversal yesterday suggested that speed may have come at a cost, and that Obama, despite the overwhelming popularity he had upon taking office and the major challenges facing the nation, will not be spared from the same kind of scrutiny his predecessors have faced.

MoDo takes the gloves off:

It took Daschleâ€™s resignation to shake the president out of his arrogant attitude that his charmed circle doesnâ€™t have to abide by the lofty standards he lectured the rest of us about for two years.

Dana Milbank wrote, “If this is Obama’s honeymoon, one shudders to think what a lovers’ quarrel would look like. “

Going “meta” for a moment, the honeymoon may be over for the “Honeymoon-Over Watch.” A Google search for Obama honeymoon returns 2,880,000 results, indicating that the metaphor may not be quite as fresh and insightful as I imagined when I turned it into a category on my blog.

I think the end of the honeymoon is a good thing — and not because of any ill will toward Obama. I see it as a sign that Obama is making a transition from being the first African-American president to the much more essential and powerful role of being simply the American president.

For now, it may still be the case that only an Establishment liberal like Maureen Dowd can call Obama “arrogant” without prompting accusations that it’s a code word for “uppity.” We are just a few short months removed from the ludicrous notion that observations about Obama’s “inexperience” constitute some sort of racial code. But as Obama adapts to a role where he can no longer vote “present,” he will have additional opportunities to attract criticism from across the political spectrum. If people grow used to the idea that it’s possible to criticize a black person without being a racist, our society will have made an important step toward racial equality.