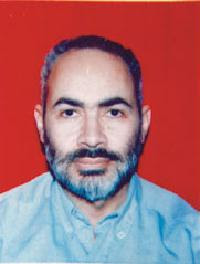 Half an hour ago I had not heard of Dr. Fadl, but apparently he is an al-Qaeda co-founder. Remember that when al-Qaeda was founded, its primary mission was not to terrorize America, but rather to drive the Soviets out of Afghanistan. Dr. Fadl doesn’t approve of the course Osama bin Laden has charted since 1988.

Dr. Fadl has a new book out, written from what apparently is his cushy cell in an Egyptian prison. Cliff May’s column today is worth reading in its entirety, but here’s my favorite passage, quoting Fadl:

â€œEvery drop of blood that was shed or is being shed in Afghanistan and Iraq is the responsibility of bin Laden and Zawahiri and their followers,â€ he writes. â€œWas it not al-Qaeda that lit the fuse of sectarian civil war in Iraq, through
[the actions of al-Qaeda in Iraq commander] Abu Musâ€™ab al-Zarqawi, who killed the Shiâ€™ites en masse? . . . Can the mentality that caused the loss of an Islamic state that existed in reality, in the Talibanâ€™s Afghanistan â€” can this mentality be expected to establish an Islamic state in Iraq â€” in reality, and not on the internet? And have the Islamic peoples become guinea pigs upon whom bin Laden and al-Zawahiri try out their pastime and sport of killing en masse?â€

If America and the West are going to defeat Islamic fascism, one component of the struggle has to involve nurturing an alternate vision of Islam. That’s why al-Qaeda threw everything it had into the war in Iraq — a successful secular Islamic state is a much bigger threat to Islamic fascism than America itself could ever be.

Similarly, Dr. Fadl is arguably a more dangerous enemy for al-Qaeda than George Bush was. Fadl, a former leader of Egyptian Islamic Jihad, may not be a Boy Scout himself, but man, I’m liking him today. 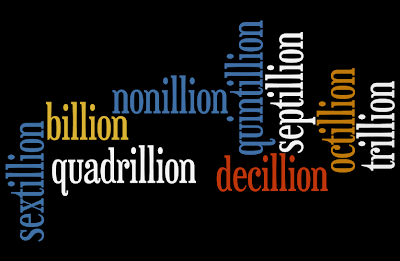 I’m becoming a fan of Politico, which has intelligent writing on politics without any overwhelming left or right tilt. Today the site notes that all of the big numbers start to blur together:

Human beings have a hard time differentiating between millions and billions and trillions, let alone the numerical subsets thereof. To most of us, it just registers as â€œa whole lot.â€ …

It is hard, then, to get people excited about the difference between $787 billion and $478 billion, both of which are equally abstract if not equally large sums â€” which is perhaps one reason why House Republicansâ€™ alternate stimulus proposal, which carried the latter price tag, failed to gain much traction with the public.

As a public service, All That Is Necessary is pleased to present this statistical glossary, for use in explaining federal spending to your grandchildren: billion, trillion, quadrillion, quintillion, sextillion (which will lend itself to financial abstinence messages), septillion, octillion, nonillion, decillion.