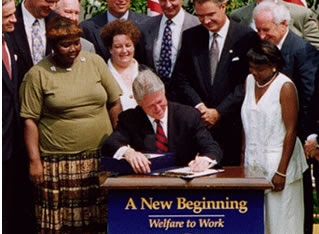 Buried deep in the so-called “stimulus” bill is an appalling sneak attack on one of the most important positive legacies of the previous Democratic president. As a National Review Online headline calls it, the provision amounts to “Ending Welfare Reform as We Knew It.”

Under the old AFDC (Aid to Families with Dependent Children) program, states were given more federal funds if their welfare caseloads were increased, and funds were cut whenever the state caseload fell. This structure created a strong incentive for states to swell the welfare rolls. Prior to reform, one child in seven was receiving AFDC benefits.

When welfare reform replaced the old AFDC system with TANF (Temporary Assistance to Needy Families), this perverse financial incentive to increase dependence was eliminated. Each state was given a flat funding level that did not vary whether the state increased or decreased its caseload. In addition, states were given the goal of reducing welfare dependence (or at least of requiring welfare recipients to prepare for employment).

The House and Senate stimulus bills will overturn the fiscal foundation of welfare reform and restore an AFDC-style funding system. For the first time since 1996, the federal government would begin paying states bonuses to increase their welfare caseloads. Indeed, the new welfare system created by the stimulus bills is actually worse than the old AFDC program because it rewards the states more heavily to increase their caseloads. Under the stimulus bills, the federal government will pay 80 percent of cost for each new family that a state enrolls in welfare; this matching rate is far higher than it was under AFDC.

It is clear that–in both the House and Senate stimulus bills–the original goal of helping families move to employment and self-sufficiency and off long-term dependence on government assistance has instead been replaced with the perverse incentive of adding more families to the welfare rolls. The House bill provides $4 billion per year to reward states to increase their TANF caseloads; the Senate bill follows the same policy but allocates less money.

On August 22, 1996, President Bill Clinton signed the Responsibility and Work Opportunity Reconciliation Act, which imposed work requirements, provided job training and education, limited the length of time an individual could spend on welfare — and perhaps most importantly, changed the funding mechanism to eliminate the “perverse incentives” described above. This fulfilled the vow Clinton made in his first inaugural speech, to “end welfare as we know it.”

I’ve grown more conservative since the days when I voted for Clinton twice, but even during his presidency I admired him for his two most conservative accomplishments — welfare reform and NAFTA. Now the first of those stands to be undone, and the “stimulus” bill also undermines the spirit of NAFTA, requiring that all iron and steel used for construction under the bill must be produced in America.

I’m not so penurious as to want to abolish welfare altogether. I just think it should be, as Clinton described it, a temporary “hand up,” not a permanent “hand out.” Welfare should not become a multigenerational way of life. I don’t think there’s anything unreasonable about requiring that any adult welfare recipient who is physically able to work should be working or training for work as a condition of participation.

Some have argued that welfare reform has hurt poor children and that the provisions should be liberalized. Fine; let’s have that debate. But don’t sneak the change into a provision buried 600 pages deep in a 1,600 page “stimulus” bill. There is nothing stimulating about giving the states a financial incentive to add more people to the welfare rolls.