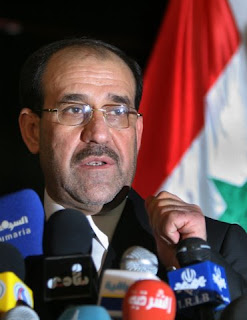 Incomplete election returns from Iraq are very heartening. In addition to being almost completely peaceful — with security provided solely by Iraqi forces, with Americans on standby — the results appear to have strengthened the secular government of Shiite Prime Minister Nouri al-Maliki. The various Sunni factions, which largely boycotted the 2005 elections, appear to have won representation proportionate to their numbers, giving them a stake in the government.

From an op-ed in the Wall Street Journal (emphasis added):

The big loser in this election was Iran. Iranian agents spent a lot of money trying to influence the outcome of the elections in the south, and they largely failed. Iran’s favored parties did poorly. The Iranians had hoped to persuade Iraqi voters to punish Mr. Maliki for signing the security agreement with the United States. Instead, these elections proved to be a powerful vote of confidence for the prime minister and his policies, including that agreement.

The big winner in this election was the concept of a unitary Iraq. An attempt to hold a referendum on establishing an autonomous Basra failed before the election. ISCI, the only Arab party that had favored the creation of an autonomous Shiite region, lost ground throughout that region, including in its own stronghold of Najaf. Iraqis have sent a clear message that they want to live in a single state with a strong central government connected to strong provincial governments, rather than in some sort of artificially federated state.

Iraq has gone from being an impending disaster to a golden opportunity. Helping Iraqi internal politics develop peacefully and across sectarian lines is a critical part of reintegrating Iraq into the Arab world, making the world’s only Shiite-controlled Arab state acceptable to the Sunni regimes that surround it. That reintegration, in turn, offers tantalizing prospects for balancing Iran and stabilizing the heart of the Muslim world. The stakes in Iraq remain very high, but we are finally starting to see the return on our investment.

Thank you, President Bush. The only way to defeat Islamic fascism is to nurture and support peaceful alternatives in the Arab and Muslim worlds. Iraq is a good start.