Remember Peter Schiff, who was subjected to ridicule for years for predicting that the housing prices and stocks were in a bubble that would eventually collapse? Well, I sure hope someone can convince me that he’s wrong this time. (Hat tip: Conservative Command)

He’s ratcheting up the dire rhetoric even more than President Obama is. But while I’ve been saying that the need for a stimulus is not so urgent that we can’t take some care in how we spend the money, Schiff says the stimulus will actually make things worse. Much worse. An excerpt from the seven-minute video:

This thing [the financial crisis] is just getting started. Remember that what’s imploding is the entire phony American economy, where Americans borrow money and spend it. What’s happened right now is that the government is now taking on that mantle, the government is borrowing and spending, because Americans are too broke to do it, but what we’re doing is making the problem worse.

And when the bubble finally bursts on the bond market… if the dollar rolls over, which it should, if it begins to fall, ultimately it’s going to collapse, that’s going to knock the rug out from everything the government is doing.

Because when the bond bubble bursts, now the government needs a bailout, the government is broke, and that’s when this crisis is really going to go into a whole new gear.

I think the economy is pretty resilient, but I can’t dismiss Dr. Doom’s predictions out of hand. One blogger recently got a lot of attention by detailing numerous ways “Peter Schiff was wrong” about last year, and Schiff has responded in detail. I don’t know which one to believe. Schiff may have been wrong about some specifics of the crisis, but he was correct in saying a crisis was building. Now everyone acknowledges that we’re in a crisis, perhaps he’s pushing his argument too hard. But in any event, it seems like one more reason to move cautiously on the stimulus. 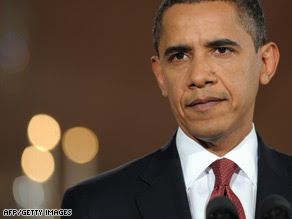 Above all else, one thing was crystal clear after President Obama’s prime-time news conference last night: The President doesn’t read this blog. (What, you thought I was gonna talk about the economy?)

Despite my admonition yesterday to Stop Saying “Depression”, Obama used the D word twice, once in his opening remarks and once in response to a question. I’m not the only skeptic — the very first question he received challenged him about his apocalyptic language:

Thank you, Mr. President. Earlier today in Indiana, you said something striking. You said that this nation could end up in a crisis without action that we would be unable to reverse. Can you talk about what you know or what you’re hearing that would lead you to say that our recession might be permanent, when others in our history have not? And do you think that you risk losing some credibility or even talking down the economy by using dire language like that? No, no, no, no â€” I think that what I’ve said is what other economists have said across the political spectrum, which is that if you delay acting on an economy of this severity, then you potentially create a negative spiral that becomes much more difficult for us to get out of.

Treasury Secretary Tim Geithner took his turn at bat this morning, and he had a narrow line to walk. He’s proposing to invest a lot more money in many of the same big banks that have already gotten a lot of capital from the taxpayers. In David Brooks’s column in yesterday’s New York Times, Geithner seemed positively soothing in comparison to his boss, saying there have been worse crises in the past:

â€œPeople are enormously uncertain about the depth of the recession,” Geithner says. 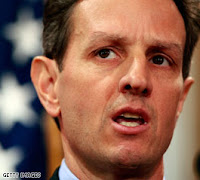 â€œTheyâ€™re enormously uncertainâ€ about how their assets will perform in this environment. But this is not like the savings-and-loan crisis of the â€™80s and â€™90s, or like Sweden, where banks themselves were dead, he said, adding that weâ€™re trying to repair â€œa system that is largely alive and will largely survive but is still burdened by systemic market failure, systemic uncertainty.â€

Today he triangulated a bit. I don’t see a transcript yet, but in his prepared remarks, Geithner had this to say:

“This is a challenge more complex than any our financial system has ever faced, requiring new systems and persistent attention to solve. But the President, the Treasury and the entire Administration are committed to see it through because we know how directly the future of our economy depends on it.”

Not the worst crisis ever, just the most complex. Given all the derivatives and exotic financial instruments that have been created in recent years, I tend to agree. (Geithner no doubt will be relieved to hear that.)

Two other things jumped out at me from Obama’s news conference. The President said a couple of times that there were no earmarks in the Senate bill, which came as a surprise to me. The AP reports that he was relying on a narrow definition of the term “earmark.” (Hat tip: Mark Hemingway.)

OBAMA: “I know that there are a lot of folks out there who’ve been saying, ‘Oh, this is pork, and this is money that’s going to be wasted,’ and et cetera, et cetera. Understand, this bill does not have a single earmark in it, which is unprecedented for a bill of this size. … There aren’t individual pork projects that members of Congress are putting into this bill.”

THE FACTS: There are no “earmarks,” as they are usually defined, inserted by lawmakers in the bill. Still, some of the projects bear the prime characteristics of pork – tailored to benefit specific interests or to have thinly disguised links to local projects.

For example, the latest version contains $2 billion for a clean-coal power plant with specifications matching one in Mattoon, Ill., $10 million for urban canals, $2 billion for manufacturing advanced batteries for hybrid cars, and $255 million for a polar icebreaker and other “priority procurements” by the Coast Guard.

Obama told his Elkhart audience that Indiana will benefit from work on “roads like U.S. 31 here in Indiana that Hoosiers count on.” He added: “And I know that a new overpass downtown would make a big difference for businesses and families right here in Elkhart.”

Also, in a blogospheric brush with greatness, it turns out Jonah Goldberg and I had similar conversations with our wives during the news conference. Goldberg wrote today:

I griped about that “create or save” line to my wife over and over again last night. It’s a new line, by the way (and it sounds like a prompt in a Microsoft word processing program). Until recently, Obama had said he wanted to create 3 million jobs (which is about the normal amount of jobs any recovery would generate, I believe). Now he says he wants to create or save 4 million jobs. Aside from the point that it will be hard to measure “saved jobs,” why is he stopping there. Let’s say there are 100 million jobs in America. Doesn’t he want to save all â€” or nearly all â€” of them? Why not say his plan will create or save 100 million jobs?

But enough about me, let’s talk about you. Do you think I’m too self-absorbed?