Sometimes a member of the privileged class sinks so deeply into unintentional self-parody that you have to wonder how he or she can even think those thoughts, let alone give them voice or commit them to paper. 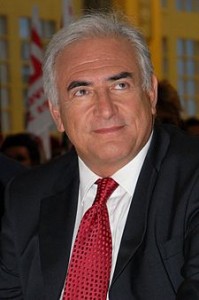 I’m referring to the words of French philosopher and sophisticate Bernard-Henri LÃ©vy in Tina Brown’s “The Daily Beast”, about sexual assault allegations against the aristocratic socialist Dominique Strauss-Kahn, head of the International Monetary Fund.

This morning, I hold it against the American judge who, by delivering [DSK] to the crowd of photo hounds, pretended to take him for a subject of justice like any other.

There is a hint of an echo of a legitimate point hiding in LÃ©vy’s astonishingly tin-eared statement.Â  The custom of the “perp walk” has evolved into a powerful and sometimes abusive tool used by prosecutors to undercut the presumption of innocence.Â  But that’s not the point BHL is trying to make.

I count myself blessed to live in a country where a poor maid from Guinea can have the head of the IMF dragged off a plane â€œsimplyâ€ because she offered credible evidence she was sexually assaulted.

Jonah goes on to point out that America has its own history of making excuses for the powerful, citing Ted Kennedy at Chappaquiddick and the serial philanderings and sexual harassment allegedly committed by Bill Clinton.

But to me the most striking example is one that Jonah does not mention: film director Roman Polanski, who was arrested in 2009 after 32 years as a fugitive from justice.Â  Hollywood and the left in general rallied around the famous director, most outrageously in the person of Whoopi Goldberg, who said on “The View”:

I know it wasn’t rape-rape. It was something else but I don’t believe it was rape-rape.

Really?Â  According to contemporaneous grand jury testimony by the 13-year-old victim, Polanski gave her champagne and a quaalude, and then had penetrative sexual contact despite her repeated protests.Â  I’d love to hear Whoopi explain what exactly distinguishes that from “rape-rape.”

Back to DSK, whom Mark Steyn lumps in with Timothy Geithner, the tax cheat who was confirmed to oversee the IRS because a liberal president “needed” him.Â  Steyn says the two episodes provide

a glimpse of the widening gulf between the government class and their subjects in a post-prosperity West. Neither Geithner nor Strauss-Kahn has ever created a dime of wealth in his life. They have devoted their careers to â€œpublic service,â€ and thus are in the happy position of rarely if ever having to write a personal check. At the Sofitel in New York, DSK was in a $3,000-per-night suite. Was the IMF picking up the tab? If so, you the plucky U.S. taxpayer paid around 550 bucks of that, whereas Strauss-Kahnâ€™s fellow Frenchmen put up less than $150.

Even if the charges against DSK are never proved, the fact that the head of an intergovernmental agency that makes development loans to poor countries thinks it’s OK to stay in a $3,000 hotel suite is a scandal in its own right.Â  As Jon Stewart said of the fact that DSK posted cash bail of $1 million, “How does the head of the International Monetary Fund get that kind of… well, there goes Nigeria’s mosquito net money.”