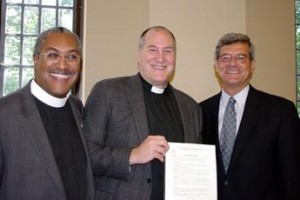 The Rev. Bernard W. Poppe, center, was congratulated at coffee hour by two special guests -- the Rev. Canon Gregory A. Jacobs, Canon to the Ordinary of the Diocese of Newark, and the Hon. Victor DeLuca, mayor of Maplewood, NJ. Bernie is holding a proclamation from the Mayor and Township Committee.

On September 29, 2002, the Rev. Bernard W. Poppe led his first service as Rector of St. George’s Episcopal Church in Maplewood, NJ.Â  I had the privilege of serving on the search committee that called him, and I still remember how he started his first sermon.Â  The parish had been through a rough period — another priest had accepted our call, then resigned before ever taking the pulpit, setting up a second, 18-month search process.

Fortunately our church has a history of strong lay leadership, which sustained us during three years with two excellent interim rectors.Â  So on that Sunday morning we all watched with great anticipation as Bernie stepped into the pulpit to preach for the first time as the seventh Rector in what then was the 97th year of St. George’s.