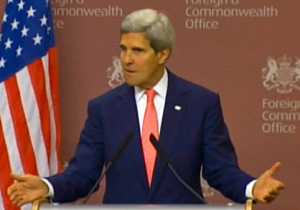 It seems like just yesterday when I was praising our Secretary of State for his role in the Syria controversy.Â  Let me check… actually, it was the day before yesterday.

Throughout many hours of congressional testimony last week, John Kerry stayed relentlessly on message and forcefully laid out the administration’s case for intervening in Syria. He was good.Â  Even though I’ve cast three presidential votes against him and his boss, I found myself oddly kinda proud of him.

Then, in a spasmodic eruption of staggering incompetence, Kerry stumbled his way onto a path that will likely lead to months of further indecision.Â  In response to a question yesterday about whether there was anything Assad could do to to avoid American military action, Kerry fled the confines of message discipline and ad libbed:

“Sure. He could turn over every single bit of his chemical weapons to the international community in the next week. Turn it over, all of it, without delay, and allow a full and total accounting for that.”

Even as he said the words, he must have begun to realize the trap he was setting for himself, because he started walking the idea back in the very next sentence:

Too late.Â  Russia jumped into the opening almost immediately, and Syria signed on today.Â  But Kerry had another arrow in his quiver of incompetence, and later in the day he let it fly.Â  Talking in London but aiming to reassure the audience back home, Kerry said any American airstrike would be “unbelievably small.”Â  That should clear up any remaining illusions Assad might have about facing danger from the United States.

Now that we’ve entered a process started by our own Secretary of State, the administration has no choice but to let the game play out.Â  There’ll be some sort of proposal from the Russians, who have repeatedly demonstrated that they have only our best interests at heart *cough* Snowden *cough*.Â  Assad will stretch the negotiations out, then eventually let some UN inspectors visit a site where the regime will hand over a few barrels and say, “there you go! That’s our chemical weapon stockpile.”Â  Writing at Commentary magazine, Max Boot describes the hurdles inspectors will face when they seek to broaden their search:

It is hard to know how such a deal could be implemented or enforced. It is one thing for inspectors to travel to Libya in 2003 to make sure that Gaddafi was giving up his entire WMD program. Libya then was a peaceful if despotic place. It is quite another thing to do so now in Syria where violence is commonplaceâ€“in fact UN inspectors looking for evidence of chemical-weapons use have already been shot at. How on earth could international inspectors possibly roam Syria in the middle of a civil war to confirm that Assad has no more chemical weapons left?

The task is daunting, indeed nearly impossible, in no small part because of our lack of knowledge about the whereabouts of his arsenal. The New York Times reports: â€œA senior American official who has been briefed extensively on the intelligence noted in recent days that Washington has firm knowledge of only 19 of the 42 suspected chemical weapons sites. Those numbers are constantly changing, because Mr. Assad has been moving the stores, largely for fear some of them could fall into the hands of rebels.â€

As I write this Tuesday afternoon, I’m sure President Obama’s speechwriters are desperately trying to figure out what he can say in his televised address this evening to make sense out of this mess.Â  Good luck, Mr. President.Â  Meanwhile, Mr. Kerry is back testifying in Congress again.Â  Stay tuned. 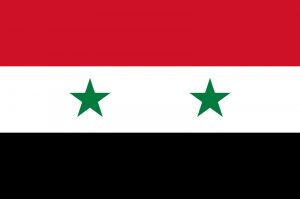