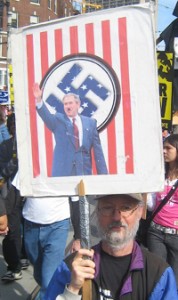 You may have seen and applauded the YouTube video of Barney Frank’s verbal smackdown of a twit who accused him at a town hall of backing Obama’s “Nazi” healthcare plan.Â  I agree that Frank’s righteous put-down was well-executed, but I have to protest the notion that anti-Obama rhetoric represents a recent coarsening of the public discourse.

Bush=Hitler comparisons were common throughout Bush’s tenure.Â  They got little exposure in the mainstream media — journalists recognized that the Bushitler loonies undermined more serious criticisms of Bush.Â  But Zombietime spent years collecting photos — the two here are chosen from hundreds on his site.

Interestingly, the young moron in Barney Frank’s audience turns out to be a member of the LaRouche cult. 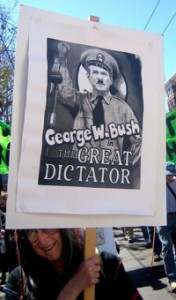 Lyndon LaRouche doesn’t operate on the same political spectrum as most Americans, but he is a seven-time candidate for the Democratic presidential nomination, and LaRouchians say ObamaCare is a “Nazi” policy because it does not include complete socialization of healthcare through a single-payer structure.

In other words, the video shows Barney Frank taking fire from his left.

My point here is not to say “the Left brought this on themselves” with eight years of Bush Derangement Syndrome.Â  My point is that the flamethrowers on both sides of the aisle do a disservice to their own cause by distracting from more worthy arguments. Also: comparisons with Hitler should be reserved for people with eight-figure death tolls.

At least when the extremist is a protester, it’s relatively easy to shrug it off.Â  It’s a little bit harder when the inflamed rhetoric comes from the Senate Majority Leader.

Update: GayPatriotWest, who is not a Barney Frank fan, has some parallel thoughts.