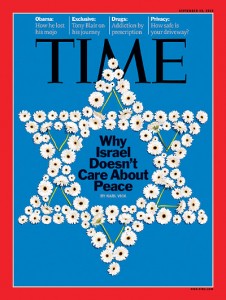 Just ahead of the high holy days, Time magazine turns reality on its head with an astonishingly offensive cover story.

Inside a Star of David constructed of white peace daisies on a blue background borrowed from the Israeli flag, the headline reads “Why Israel Doesn’t Care About Peace.”

Here we are in the middle of peace negotiations that Israel’s prime minister, Benjamin Netanyahu, insisted upon, and to which the president of the Palestinian Authority, Abu Mazen, had to be dragged, and Time writes about â€œwhy Israel doesnâ€™t care about peace.â€ Is there no limit to the Israel-bashing that now passes for serious conversion in polite society?

But wait, there’s more.Â  What would Time have us believe about why Israel doesn’t care about peace?Â  Turns out it’s because the Jews are busy making money.Â  You can’t make this stuff up.

My thoughts about the Jewish state are best summed up by a blog post titled “I Stand With Israel.”Â  L’shana tova to my Jewish brothers and sisters on Rosh Hashanah — may you be inscribed and sealed for a good year.